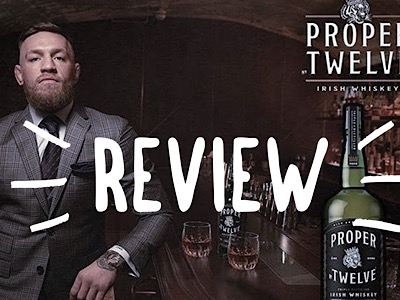 I finally got my hands on Conor McGregor’s Proper Twelve whiskey and I couldn’t think of a more appropriate time to uncork it than his return at UFC 246. (I know. I’m late to the party with this review.)

It’s one hour before UFC 246’s main card kicks off and the Proper Twelve green bottle is sitting on the kitchen counter daring me to taste it.

I am hesitant immediately because I am not a fan of whiskey. I was in the Marine Corps and one fateful 1994 Saturday night in Honolulu I had too much and woke up in a beach lifeguard station.

30 minutes until the PPV kicks off now and I pour a shot glass full and hold it in front of me, eyeballing it like it was an old foe. I raise my arm and take the shot and after a few seconds I am reminded of how warm a whiskey makes your throat feel. I expected a sour taste and was readily expecting to chase it with the cola I had open beside me. I made it through two more shots and finally needed a drink of soda. I was pleasantly surprised and for any of you ready to call me a lightweight I admit it. I rarely drink alcohol so I had to pace myself.

When the Anthony Pettis vs Carlos Diego Ferreira bout started I tried it like I usually enjoy whiskey, fully mixed with soda, and it was smooth going down. It was a little too powerful for me but not even close to the others that a young man from Kentucky would have tasted in his youth. I was told by my cousin Matt who loves whiskey that it’s supposed to have a little kick. Shows what I know.

I had my final glass of soda and Proper Twelve mid way through the co-main event of Holly Holm vs Raquel Pennington and I must have hit the right mixture on the nose. With the soda the Proper Twelve had a warm sweetness for lack of a better description. I thought about having another but I was afraid I would overdo it.

Okay, I had another shot. It was better this time around for me. Probably because I was ready for it. Until UFC 246 it had been probably ten years since whiskey hit my lips.

Conor McGregor TKO’d Donald Cerrone in 40 seconds and so went to bed with a still slightly warm stomach.

Would I prefer this to the other whiskies I have tasted? Yes, and I will likely use this for when I have friends over and we have a social drink watching a game or after dinner. I didn’t feel sick from it and I truly enjoyed the taste with or without soda.

If you don’t believe me try it for yourself.

If they make a honey version of Proper Twelve it’s on. Conor…make it happen, sir.