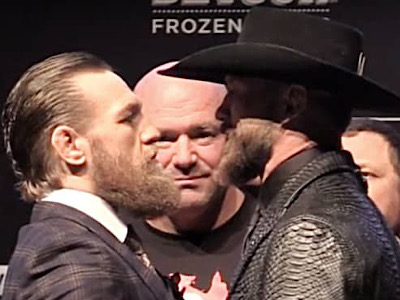 Is this nice guy persona for Conor McGregor an act? Is it real? His calm demeanor and praise for his UFC 246 opponent Donald Cerrone is a far cry from his previous encounter with ‘Cowboy’ when the Irishman was the interim featherweight champion. The true test will be how he reacts if he snags the win and how humble he remains on the mic.

In my opinion it is real. Being a dad – as other dads can tell you – changes your life’s perspective. You don’t want to do anything that will risk your livelihood and fighting is Conor’s. Punching old men and trashing buses is not a way to keep in the good graces of the law or the fight game. Enough bad press and people start paying attention to you as a train wreck and not the big star you were, or want to be. McGregor’s newfound respect may actually be a newfound understanding of what is good business for the long game and what is cheap heat to pop buy rates.

The money means a lot and that’s not a secret to people who follow McGregor. Everything he does is financially centered. His mega fight with Floyd Mayweather Jr, his Proper Twelve brand of whiskey, his clothing line, and everything in between. This is why I think Conor is genuine because respect does not sell fights. He is solely relying on star power to make money for his bout with Cerrone on Saturday.

After the UFC 246 press conference yesterday he spoke with the media and opened up while continuing his praise for Cowboy. He seemed genuine but we want you tell us if you agree.