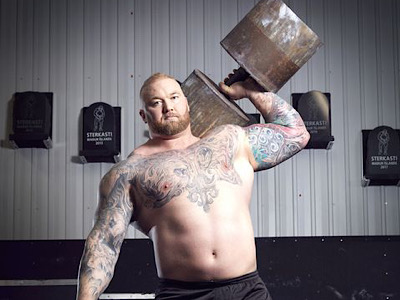 Dierks Bentley put it best when he sang, “What was I thinking”. What was this dude thinking?

Actor Hafthor Julius Bjornsson played the ruthless and brutal knight The Mountain on Game of Thrones. Before that, the 6’9” Icelandic 30 year old became the first person to win the tri-fecta of the Arnold Strongman Classic, Europe’s Strongest Man, and the World’s Strongest Man competitions. This is reportedly what caught the attention of the show’s casting director. We’re guessing it was really his freakish size. Just saying. He was the third and final actor to play the role.

He has dabbled a bit in the MMA community mainly in publicity opportunities like this video with Conor McGregor.

A video that resurfaced recently shows the big man and a possibly psychotic man with a death wish in a sparring session. The reaction from MMA fans was mostly positive with a standard consensus of essentially, “you’re not bad but could be great with some proper training”. Eh, maybe.

In the video he pursued his prey who did not want to actively engage for the most part. Halfthor misses him with a big straight punch once and if he had not stopped his hand he likely would have put it through the wall. Check out the entire clip below.