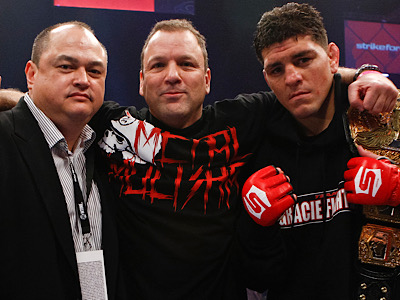 Jorge Masvidal defeated Nate Diaz to win the one time BMF belt that has been discussed more than any title in mixed martial arts it seems when it comes to defending it. Shortly after Nate lost, his brother Nick did a rare interview with Ariel Helwani in which he stated he was the real BMF and he didn’t like some of the things that Jorge was saying about his little brother. It didn’t take long for Jorge to respond and the idea of a fight between the two has picked up steam with exchanges on social media.

The latest to stoke the fire is Nick’s former coach, Cesar Gracie. If nothing else you have heard the Diaz brothers say his name on the microphone enough to remember it even if you don’t know what he looks like. he also spoke to Ariel Helwani about the BMF title.

That is his belt. The BMF belt, Nick is the BMF, if you will. That’s the perfect belt for Nick. The hype on something like that would be so huge to fight a guy like that. You got to get fighters that are doing something now.

I don’t think you would find a fighter or fan on the planet that wouldn’t like to see that bout. It almost came to fruition several times but it ended up being Jorge versus Nate instead.

Check out everything he said to Ariel and let us know in the comments if you think this fight will ever materialize and who would win.