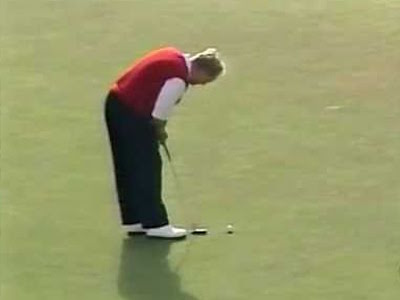 We all watch golf because we love the sport. That much is obvious. When we’re watching, we’re looking for something spectacular to happen. We want to see a truly great player put in a career-defining performance. We want to see the lead change hands over the course of a contest, and everything to come down to the final hole. We want to see someone play their way into trouble, and then play their way back out of it again.

There’s something else we’re all interested in seeing though, and that’s a great upset. While there’s a lot to be said about seeing a masterful performance by a leading professional at the very top of their game, you also expect it to happen. When a player ranked in the top 10 in the world walks away with the trophy at a major, you appreciate their talent, but you’re not exactly surprised. Upsets add a whole different dimension to proceedings. With an upset, someone who really shouldn’t have won has just done the impossible, and turned the sport upside down. You count yourself as lucky for having seen it with your own eyes.

It’s a been a few years since we saw a truly huge upset shock in golf, but they do happen. The following five are, for our money, the biggest in the history of the sport.

There was something in the air the night that South Africa’s Charl Schwartzel won the Masters in 2011. He was unfancied by anyone for the event, and had only joined the PGA tour earlier that year. To call him a rank outsider would have been unkind to rank outsiders. This is the most recent of the huge upsets on our list, and will likely still loom large in the memory of many of our readers.

Even at the start of the final round, Schwartzel wasn’t considered to be in contention for the Green Jacket. He’d performed admirably, but found himself behind Rory McIlroy, Jason Day, and Adam Scott. To get himself over the line, he achieved something that no other player before or since at the Masters has managed – he holed four consecutive birdies to cruise past his astonished opponents, and finish up with the win. Poetically, his victory came fifty years to the day since his countryman Gary Player had become the very first overseas player to win the Masters. It was fate, and it was incredible. Schwartzel still plays, but has never won another major.

It should be a criminal offense to list the words ‘Jack Nicklaus’ and ‘upset’ in the same sentence, but there’s no other way to describe what the Golden Bear somehow pulled off in Augusta in 1986. Nicklaus was 46 when the tournament started, and hadn’t won a major of any description for six years. He hadn’t won the Masters for nine, and having already done so five times, wasn’t fancied ever to achieve it again. Jack, and fate, had other ideas.

As Seve Ballesteros gazed on in wonder and disbelief, Nicklaus shot seven under 65 on his last trip around the course, including 30 across the back 9. It was a scintillating run of form that nobody had an answer for, and saw Nicklaus crowed the oldest Masters champion ever. The record still stands. You may have seen clips of this victory in the gold media again recently, as Tiger Woods’ emotional triumph at the age of 43 brought memories of the victory flooding back.

Speaking of Tiger Woods, we’re now going to talk about one of his most infamous defeats. Sorry, Tiger. Woods was still at the peak of his powers in 2009. He’d won the US Open in 2008, and the PGA Championship in 2007. He seemed destined to repeat the triumph in 2009, but Y.E. Yang had other ideas. While the commentators and the press focused on a final-round battle between Woods and Padraig Harrington, the barely-known Yang was an afterthought in third place. In the space of a few short hours, he went from afterthought to superstar.

Harrington was neither here nor there during the final round, performing indifferently. Woods found that he spontaneously lost the ability to put. Yang flew past both of them by chipping an eagle at the fourteenth hole, and it seemed to knock the wind out of his opponents. A birdie on the final hole sealed the deal, and South Korea’s Yang was the first Asian player in the history of golf to pick up the trophy at a major.

Greg Norman has never won the Masters. Everybody knows that, but they don’t mention it around him. It’s a touchy subject. Norman finished second in Augusta on three heartbreaking occasions, and although it’s probably his 1996 loss to Nick Faldo that haunts him the most, it was his 1987 loss to Larry Mize which was the most stunning.

Winning the Masters was all Larry Mize had ever dreamed of. He was born and raised in Augusta, and remains the only Augusta native ever to have won his local competition. He had to go right down to the wire to do it, facing off against Norman and Seve Ballesteros in a playoff. Ballesteros, not for the first time in the history of shocking upsets, could only watch on in horror as he was eliminated at the first hole. On the second, Mize chipped an impossible birdie from 140 feet away. A shellshocked Norman was unable to tie him, and history was made. Mize never finished better than 4th in another major. He didn’t need to – his legendary status was secured.

We appreciate that nobody reading this remembers Ouimet winning the 1913 US Open. It was a very long time ago. We don’t remember it either. Allow us to set the scene for you in terms of how unlikely this was. Ouimet winning the US Open was as unlikely as visiting an online casino, loading up a casino game like Fluffy Favourites, placing one bet and instantly hitting the jackpot. It was as unlikely as walking into a casino with a dollar in your pocket and walking out a millionaire, having not placed a single losing stake. The odds on Ouimet winning at the Open wouldn’t just have hit the jackpot on that day, it would have bankrupted the entire casino. That’s the level of improbability we’re talking.

Back in the days before the First World War, the British pair of Ted Ray and Harry Vardon were considered to be among the best golf players in the world. The US Open was predicted to be a matter that would be settled between the two of them. Francis Ouimet was not a professional golfer. He was a 20-year-old amateur who was only invited to play because he lived in Brookline, Massachusetts, and that’s where the tournament was being held that year. He had to get special dispensation from his employer to play. On his favorite course, in rainy conditions, he beat the Brits by five clear strokes. A legend was born, America had its first-ever golfing hero, and the world had seen one of the most astonishing sporting upsets of all time.