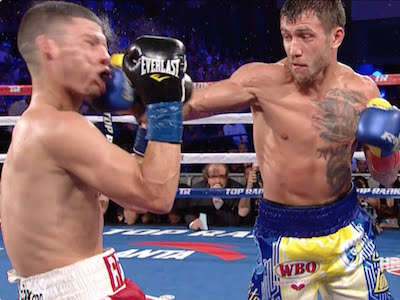 On August 31, arguably the best fighter on the planet will take to the ring in the UK for the first time as a professional, as Ukrainian maestro Vasyl Lomachenko (13-1, 10 KOs) prepares to defend his lightweight titles against Britain’s Luke Campbell (20-2, 16 kos).

Lomachenko has shot to boxing supremacy in a short space of time, having established himself as the consensus pound-for-pound number one in the sport in only 14 bouts in the paid ranks.

The 31-year-old is swiftly making history with almost every ring outing in his already illustrious career and his next performance will be held in front of a very hopeful and expectant UK crowd at the O2 Arena in London.

All eyes will be on the ring come the end of the month, as ‘Loma’ will collide with Hull-born challenger Campbell on another huge Sky Sports Box Office event.

Lomachenko has, of course, featured on UK soil before during his glittering amateur career, one which is widely regarded to be best of all time in the unpaid side of the sport, but this will represent his maiden outing there as a pro.

Yorkshireman ‘Cool-Hand’ Luke Campbell will be the latest man to step into the ring and try to dethrone him of his lightweight crowns.

But, since bouncing back from that early world title setback in only his second pro bout, the Ukrainian ace has looked a class above everyone else around his weight and almost unbeatable at times. Come August 31, Lomancheko finds himself the heavy -1600.00 favorite with NoAccountBet.com to triumph once again.

Campbell, therefore, has a mountainous task ahead of him in the English capital this summer, with ‘Loma’ being seemingly in his prime years and not showing any sign of slowing down.

It’s perhaps the most difficult feat to accomplish in boxing right now and the British contender will have to pull off an incredible upset and produce the best showing of his career so far in order of achieving the widely unexpected.

Campbell has already come up short in his pursuit of world title success as a professional to date. The now 31-year-old suffered a shock defeat at the hands Frenchman Yvan Mendy back in December 2015 and was forced to put his plans of having world honours wrapped around his waist on hold for some time.

He returned to winning ways with five straight victories to earn himself a crack at world honours in September 2017 against stylish Venezuelan fighter Jorge Linares, who was then in possession of the WBA and Ring Magazine belts in the 135 lbs division.

Campbell was dropped and outpointed by Linares that night, a man who Lomachenko stopped in 10 rounds, and now he must come up with one of the biggest shocks in boxing history to dethrone the reigning lightweight king in London on August 31st.