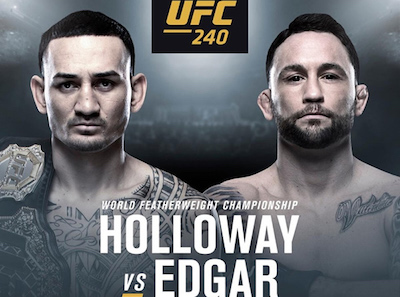 The average consensus of the betting sites pier reviewed by MyTopSportsbooks.com expect Holloway to dominate Edgar at UFC 240, setting the champion at (-410) and the challenger at (+340). That means if you wagered $100 on Edgar, you could profit $340 if successful. Holloway lost his last fight, his first at lightweight in the UFC, to Dustin Poirier in surprising fashion. Poirier stood and traded with Holloway and actually wound up doing more damage on the feet.

He was able to eat clean shots and keep moving forward with his own combos. Edgar is going to have a tough time duplicating that gameplan. Poirier had a three-inch reach advantage and was visibly heavier on fight night. Edgar is four inches shorter than Holloway and his punches won’t have the same power behind them. Holloway’s supreme takedown defense (83% career) will make it hard for Edgar to find a path to victory.

Holloway originally won the interim featherweight belt with a TKO over Anthony Pettis at UFC 206 in December 2016. Seven months later he unified the belts to become the undisputed UFC featherweight champion by taking out Jose Aldo via third round TKO at UFC 212.

In December 2017 Holloway once again stopped Aldo with a TKO in the third round at UFC 218. Just over one year later “Blessed” once again proved he belonged on the throne by stopping top contender Brian Ortega via fourth round TKO at UFC 231. Now Holloway will try to defend his title against

It should be noted Edgar suffered a KO loss to Ortega at UFC 222 in March of last year. He also has two unanimous decision losses to former champ Aldo at featherweight. For these reasons the oddsmakers are putting Edgar as a serious underdog against Holloway at UFC 240. However, as every MMA fan knows styles make fights and anything can happen inside the octagon so you can never count Edgar out completely.