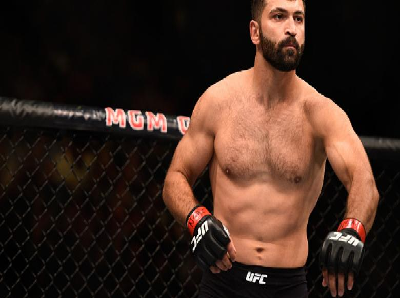 At one point most everyone thought that Andrei Arlovski would stay invincible forever and destroy all of his opponents. Obviously that didn’t happen but the man is still terrifying.

I took Andrei Arlovski to the airport in Louisville, KY shortly after he lost via KO to Tim Sylvia back at UFC 59: Reality Check in 2006. He was in no shape to be in public mentally but he did show up to the event I was the ring announcer for. Showed up 2 hours late but he finally made it. He was shaken to his core from getting flattened and I made a joke about his beard being so thick it was padding. He was taken aback by the comment but I recovered quickly. Still, it was obvious he was self conscious about the ‘weak chin’ comments going on at that time.

They still continue. Arlovski has lost ten times via KO and for a time it looked like the chin was cracked for good. Thankfully he came back strong and persevered. Even after his win over Ben Rothwell at UFC on ESPN 4 this weekend – in which his chin was tested again – he still received criticism from relentless trolling fans. During the post fight media scrum he wasn’t having any of it and pretty much went off.

Ben, he’s a f**king heavy hitterAnd once again I want to tell everyone to shut your f**king mouths about my f**king glass chin. So go f**k yourself, f**gots. That’s it. I just proved everyone f**king wrong. I’m happy that I shut their mouths again, so that’s it.

I want to fight everyone who ever whupped my ass in the past. So of course I want to fight who is in front of me, but it’s up to the UFC, to Dana White, to the matchmakers. And I never pick my opponents. So I’m good to go.

What do you think of Andrei’s comments? That’s a relatively long list of people he wants to face and he’s 40.