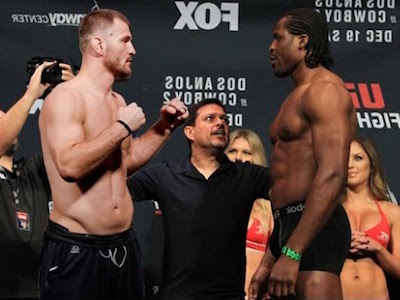 It previously looked like Francis Ngannou would steamroll his way to a UFC heavyweight title triumph when he was rampantly running through any man that stood in his way in the octagon.

He stormed his way to a title shot against then-champion Stipe Miocic back in January last year but it was against the former division king that he came up short for the first time since joining the roster. What followed that was another shock loss at the hands of Derrick Lewis in what was a dull meeting between two big-hitting punchers.

Back-to-back losses threatened to derail the hype and momentum that he had built up over time, but he has since bounced back and regained the feared aura that previously surrounded him once again.

Since those two consecutive losses he has beaten Blaydes again, Cain Velasquez and Junior Dos Santos, all inside the first round of their match-ups inside the cage. These three hugely destructive displays have seen Ngannou fire himself back into possible contention for a shot at the title, now possessed by Daniel Cormier.

Three straight victories inside the opening round is a highly admirable feat and his last win over Dos Santos proved he still has the fear factor, with his opponent having lunged in and tasted the full devastating KO power to find himself out and on the canvas.

Ngannou was a huge favourite going into his last octagon outing with Dos Santos and he was well-backed in the UFC picks ahead of that heavyweight meeting, as he rallied to another emphatic victory as widely expected.

So what will be next for the concussive-punching Cameroonian? He already failed in his first attempt at a title shot against Miocic but he may find himself in a position to try again in the near future.

Cormier is the man in possession of the heavyweight strap and he will finally face Miocic in a deserved rematch on August 17th at UFC 241, having prevailed in that first meeting in July last year. The American rallied to a stunning first-round knockout of Miocic to dethrone the champion and reign supreme in Las Vegas, also earning himself a financial bonus for Performance of the Night in the octagon.

The 40-year-old has since defended the belt on one occasion against Derrick Lewis and will next face Miocic in a rematch. But a certain Francis Ngannou could be waiting in the wings for whoever comes out on top in that one, after rebuilding his career of late with typically emphatic performances of his own.

Ngannou holds the record for highest punching power ever measured by the UFC at 129,161 units and it’s that incredible power that can guide him towards becoming UFC heavyweight champion in the near future.

He may have been outclassed over five rounds in his initial clash with Miocic last year but the massive heavyweight threat looks to have bounced back strongly and learned a lot from his past defeats in the octagon.

The intimidating power puncher has long been chasing his dream feat of having that heavyweight crown wrapped around his massive waist in his professional MMA career and that could well become a reality in the coming months.

But it will take further solid displays from the beastly African in order to edge closer to that target and achieve it either this year or next, with Cormier or Miocic set to hold the title come the end of the summer.