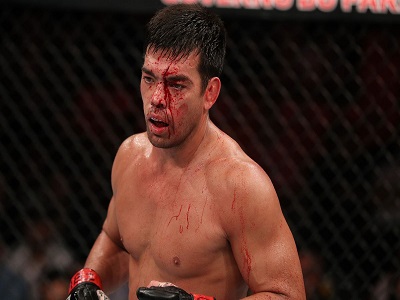 Tonight at Bellator 222 Chael Sonnen will have the chance to complete an impressive Brazilian tri fecta. He has beaten legends Wanderlei Silva and Shogun Rua and number 3 awaits him. Enter Lyoto Machida.

About five years ago a fight between Chael and Lyoto would have been a solid main event for the UFC but times have changed. Tonight they prop up the welterweight title fight between champion Rory MacDonald and challenger Neiman Gracie.

Machida was pretty open to anything anyone asked him recently and remained classy as he always has even when fighting trash talking Chael Sonnen.

So you know we’ve both already fought a lot of legendary fighters. Chael has a great outcome over a lot of them. What I think is (that) Chael is a legend fighting, usually he comes to the fight very well prepared, which I like because I like to have something to challenge myself. I still believe that Chael Sonnen, even though he’s 42 years old, he’s still young in his body. That’s why it’s going to be a great fight.

When asked about sitting in the co-main event with Chael he said:

That doesn’t change anything in my mind. I just became more excited because I can watch the last fight, I’ll be able to watch the last fight. Of course I’d like to do the main event, but we’ve got to do what’s going to be the best for the event. It’s a championship (fight). The fight between Neiman Gracie and Rory MacDonald is going to be a great fight for sure. So they put my fight against Chael Sonnen in the co-main event, which is good too, so I’m not worried about that.

Check out everything he said in the video below: