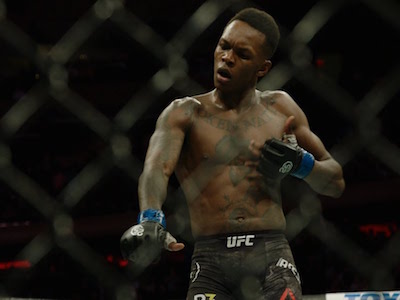 Brad Tavares, the American MMA fighter who competes in the middleweight division of the Ultimate Fighting Championship (UFC), has spoken about his hopes of beating Israel Adesanya in a return bout yet to be arranged. Adesanya, a Nigerian born New Zealander, is the current Interim Middleweight Champion of the UFC. He won his title on the 19th April 2019 when he beat Kevin Gastelum via a unanimous judge’s decision. He is also a former Glory Middleweight Champion and an ex cruiser and heavyweight King of the Ring champion – a New Zealand kickboxing tournament.

Adesanya’s nickname is the Last Stylebender, a name he got from a children’s TV program character called “Ang;” the only Avatar to have the ability to practice air-bending, earth-bending, fire-bending and water-bending, and the first of his kind to ever use a technique known as energy-bending.

Tavares fought the Last Stylebender in July 2018. Adesanya was judged to have won the contest on a unanimous decision. Tavares revealed afterwards that he had fought with a broken foot. However, he made no excuses, saying that on the night, Adesayna was the better fighter.

Sometime after the bout against Adesanya, Tavares admitted to breaking his arm in a brawl. He had first attended hospital to have a gashed eye looked at but as he was waiting, his arm became swollen and painful. He then underwent what he maintains was a” poorly conducted X-ray”.

He was told at the time that he had suffered a broken arm but that it did not require surgery. However, three months afterwards he was given a different prognosis – one which said that did, after all, need an operation.

As a result of the incorrect initial diagnosis, the loss of strength and mobility in his arm was significantly worse than if he had undergone surgery earlier. It meant that his return to MMA action was delayed more than it needed to have been.

The broken arm bone has now healed satisfactorily and he has been cleared to fight again. He has, therefore, made up his mind to move on and get on with getting back to peak fitness. He is, in his own words, experiencing some “weird stuff” going on with his arm and is determined to deal with that before getting into the ring again.

Hoping for a rematch with the Laat Stylebender

Tavares’s training is going well and he has been agreeably surprised to establish that he has not lost as much of his fitness or technique as he had at first feared.

The good thing about Tavares’s lay off is that it also gave time for his foot to heal. It broke during his fight with Adesayna and prevented him from kicking which is why it was such a lopsided fight. When fully fit, he believes he is more than a match for the Last Stylebender and that he can win.

Mixed Martial Arts fighting or MMA (as it is more popularly referred to) is gaining in popularity on a global basis. Sports fans all over the world not only enjoy watching sport in general, but they also like to increase their participation and enjoyment by betting on the outcome of their favourite sporting events.

MMA is looking to increase its worldwide audience and not through television, which is very expensive and extremely competitive. However, by using YouTube, both the UFC and the One Championship are now actively screening fights on reality programs over the internet. Fortunately, it’s drawing more spectators in and is also likely to stoke demand for live betting.