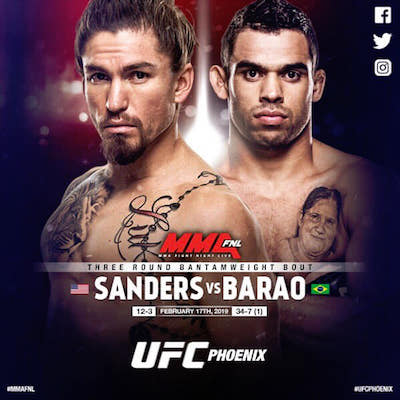 Luke Sanders (12-3) will make his return to the Octagon against former bantamweight champion Renan Barao (34-7, 1 NC) at UFC on ESPN 1 on Feb. 17. Sanders announced the matchup via social media on Friday.

UFC on ESPN 1 will mark the organization’s premiere on their new broadcast home with the sports network giant. Though not yet official, the UFC is rumored to be targeting a heavyweight matchup between former champ Cain Velasquez and Francis Ngannou for the headliner. The event will be held from Talking Stick Arena in Phoenix.

Sanders is looking to rebound from a submission loss to Rani Yahya at UFC Fight Night 135 back in August. Prior to that the 33-year-old Nashville native and former RFA champ won a unanimous decision over Patrick Williams at UFC on Fox 29 last April. Now 2-3 inside the octagon, “Cool Hand” also holds a submission win over Maximo Blanco at featherweight from his UFC debut in Jan. 2016.

Barao could be on the chopping block here as he’s dropped his last three fights in a row. The 31-year-old Brazilian most recently dropped a split decision to relatively unknown Andre Ewell at UFC Fight Night 137 in September. And Barao also missed weight by five pounds for the fight.

Barao won the interim UFC bantamweight championship back in 2013 with a TKO over Eddie Wineland. He was later promoted to undisputed champ and had a successful title defense over Urijah Faber in Feb. 2014 before losing the belt to TJ Dillashaw three months later.