Ahead of the most eagerly anticipated fight of the year, Ricky Hatton has shared his views ahead of the WBC title clash between Tyson Fury and Deontay Wilder.

The pair are set to go toe-to-toe on Saturday evening, and former IBF champion Hatton believes that the core belief Fury is demonstrating could be the deciding factor to victory.

“Tyson has many attributes – his skill, his height, his awkwardness but Wilder’s biggest problem will be Tyson’s belief in himself,” Hatton told The Daily Star.

“He went to Germany against Klitschko and wasn’t bothered, he is going to LA and is not bothered, only had two fights back and not bothered.

“He believes he is one of the greatest of all time. That is what Deontay is up against – someone with that belief.”

Fury has only fought twice since he vacated his WBO, WBA, IBA and linear belts in 2016 but confidence will be sky-high in the Gypsy King’s corner.

Spoke to Ricky Hatton on why he thinks Tyson Fury will beat Deontay Wilder and how he is like Fury and Frank Bruno https://t.co/99XNMBTrhB

Those two victories came against Albanian fighter Sefer Seferi and world title challenger Francesco Pianeta, but the morale-boosting wins have rightfully given Fury the self-assurance ahead of Saturday’s bout.

Hatton will be in Fury’s corner at the Los Angeles’ Staples Center this weekend alongside Ben Davison and Freddie Roach, with boxing fans expecting fireworks from the first bell. And much of that will be owed to the techniques of Wilder.

There’s no denying the talents of the WBC champion but what exactly will Wilder have in store for Fury on Saturday night?

The Bronze Bomber has frequently knocked opponents out but with Fury posing the biggest threat in his career to date, Wilder will need to call upon all of his experience and know-how to ensure he remains unbeaten.

Wilder’s unfathomable record of 40 wins (39 KO’s) will be severely tested by Fury, but the American fighter is renowned for his exuberant fighting style and gung-ho approach, something of which Fury will know all too much about. 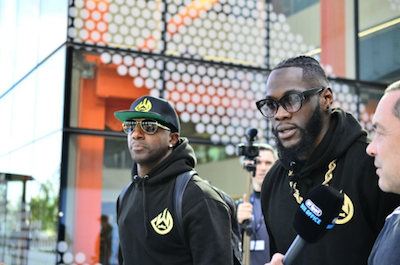 Expect Wilder to swing big, hit big and thrust as many powerful body shots to Fury as is possible but keeping composed will be vital for Wilder’s chances.

Although Fury is considered the underdog, Wilder will need to try and navigate himself about the 6’9” challenger who is perhaps one of the hardest boxers to actually hit currently.

If Wilder comes out of the blocks as quickly as expected, he’ll likely land some of his famous big shots and that could see him wear down Fury over the course of the fight.

Remaining cool, calm and collected will likely be the initial approach displayed by Fury but he’ll look to school and elude Wilder as much as possible. In particular during the early rounds.

Light on his feet and seemingly always analysing his opponent, Fury will need to use all of his wits to stay one step ahead of Wilder.

Such techniques and tactics helped Fury dethrone Wladimir Klitschko back in 2015 so it’s likely Fury’s camp will adopt the same approach on Saturday.

Although they are completely different opponents, Fury will need to come out of his comfort zone and try and land some big hits on Wilder. Much easier said than done but if Fury is able to dodge the expected early barrage of hits from Wilder and land a few of his own. It’ll make for a very intriguing battle.

It’s a case of finding that happy medium from Fury’s perspective and if he can demonstrate a mix of landing the big shots and schooling his opponent, Hatton’s comments about Fury’s belief will be more than justified.

You can check out the Wilder v Fury odds, with the American the favourite at 4/7.