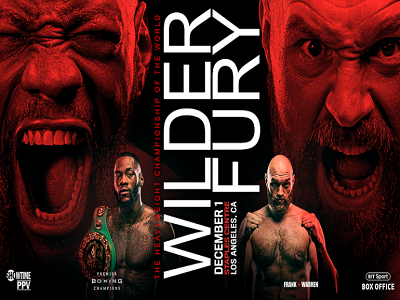 We posted yesterday’s intense staredown between boxers Tyson Fury (27-0) and Deontay Wilder (40-0) that got physical. Former WBC champion Fury may be physically taller than current champ Wilder but they are equal when it comes to swagger. Both fighters are undefeated and both are known for knocking out their opponents so odds are one of them could be counting the lights on Saturday. Speaking of odds, the book makers have it fairly close with Wilder getting the nod.

To put that in perspective Tyson Fury was a -10,000 favorite in his last match against Francesco Pianeta which Fury won via points. This means that the referee alone scores the bout and decides who the victor is. If a boxing match is sanctioned by the British Boxing Board of Control this is the method used. On Saturday night they will be throwing leather in front of the traditional three judge scoring system, but being honest we don’t think this goes the distance unless they begin to tie each other up.

This fight is a very intriguing one because someone will have a loss on their record coming out of it as long as we don’t get a controversial draw like Canelo vs Golovkin. Showtime plays host to the event which begins at 9PM on pay per view from the Staples Center in Los Angeles.