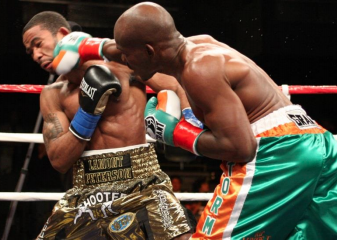 So, you’ve begun to participate in the sport of boxing. First off, pat yourself on the back, young grasshopper; you’ve chosen a noble undertaking, but a very useful one, also. Boxing is an amazing sport for staying in shape, developing strength, confidence, and endurance—not to mention, self-preservation!

The last thing you want to do is show up to a boxing gym, put on your boxing gloves and not understand what your coach or your sparring partners are trying to communicate to you. If you get the impression that they are speaking Chinese, you might need to brush up on your “boxing lingo.” There’s no need to worry. Today we are going to cover a few of the essentials that every boxer should be familiar with: 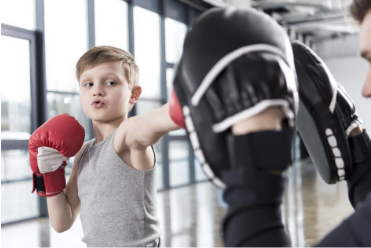 This is the most common stance in boxing, where the right hand is considered the most powerful hand. In an orthodox stance, your left foot is ahead of the right foot. Your left hand will lead as well. In this stance, the right hand is a bit farther back to allow room to generate a more forceful strike.

This is basically a mirror image of the orthodox stance. A southpaw boxer’s left hand is considered the dominant one; therefore, it is farther away from the opponent. A southpaw’s right foot and right hand are closer to his or her opponent.

The jab is a basic straight punch with your lead hand. Assuming boxers take an orthodox stance, they would perform a jab with their left hands, and the inverse is true for southpaws. The jab is often used to set up combinations and to bait the opponent to react. 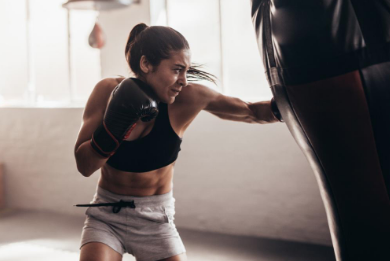 The cross is a straight punch that travels across the boxer’s body—hence its name. Assuming an orthodox stance, the cross is performed with the right hand, and the inverse is true for southpaws. A cross is a more powerful shot than a jab and will often follow a jab.

A hook is a looping punch in a horizontal arc into the opponent. The hook is generally a more powerful shot than the cross and the jab. You can perform a hook with either the left hand or the right hand. A hook to the body may also be called a “rip.”

An uppercut is a punch that travels on a vertical line toward the opponent’s chin or body. The punch generally originates from the boxer’s waist and travels upward.

A counterpunch will occur immediately after attack strikes. The counterpuncher will wait for the attacker, effectively slip the attack, and follow up with his or her own counter-attack.

Blocking is the stoppage or deflection of an opponent’s attack in order to reduce taking damage. In boxing, blocking generally occurs when boxers place their boxing gloves in the way of their opponents’ attacks.

Clinching is essentially when boxers grab hold of opponents by wrapping their arms around them. Clinching is only allowed for a short period of time—referees will break up a clinch after seconds. Clinching is generally used when boxers are overwhelmed by their opponents’ attacks and they need a strategy to stop the onslaught.

Bobbing and weaving is a term for a defensive strategy that includes moving the head laterally and beneath an incoming punch. Fighters will bend their knees to change levels and move their heads to avoid incoming punches and set them up for counterstrikes.

Slipping is a defensive tactic considered very similar to a bob and weave. The main difference with slipping is that when you slip a punch, you are simply moving your head to the outside of the punch with no motion in your legs. Muhammad Ali was a great example of this.

Another more contemporary example of this was Anderson Silva, who often slipped multiple punches at a time. While seasoned fighters can slip punches with their guard down, beginners should always keep their boxing gloves close to their faces while slipping punches to protect themselves.

A parry is a defensive tactic in which boxers will wait for their opponents’ attacks and then use their gloves to misdirect a punch. Parrying is often done with the purpose of following up with a counterpunch, as a successful parry will leave the opponent vulnerable. 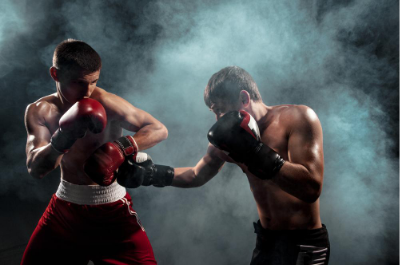 A feint is basically a partial attempt at a punch that is withdrawn in order to bait the opponent to react. A feint is used in a bout to learn about your opponent’s reaction, and it then allows you to react to them accordingly.

The “pocket” refers to each boxer’s area of reach. In other words, it is a place where both boxers are able to hit each other. Your coach may instruct you to “get in the pocket” if you have the upper hand in the bout, or vice versa.

In boxing, a 1-2 is universally known as a jab-cross combination where you lead with a jab and follow up the punch with a cross. This is the most basic and first combination you should learn and get comfortable with.

A professional boxing match generally lasts 12 rounds. When both fighters survive all 12 rounds and leave the fight up to the judges, they are said to be “going the distance.”

These terms should be more than enough to get you started. Learn these well, train hard, and go get ‘em!