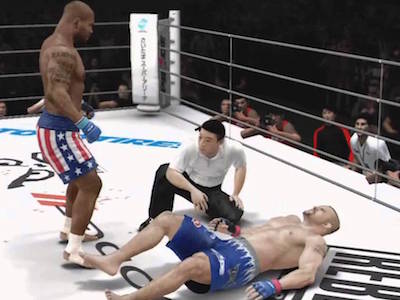 Former UFC light heavyweight champ Chuck “The Iceman” Liddell is gearing up for his Pay-Per-View showdown with fellow former UFC champ Tito Ortiz this Saturday night for Golden Boy Promotions. It will be the pair’s third fight following knockout wins by Liddell in 2004 and 2006. However, Liddell has been retired since 2010 while Ortiz has stayed busy under the Bellator banner, most recently submitting Chael Sonnen in Jan. 2017.

Naysayers, including Tito, are saying Liddell looks stiff and slow following the release of some recent training footage. But Liddell disagrees, saying he’s hitting hard as ever and is moving fast. He argues the training footage was just him warming up and he wasn’t there trying to impress anyone. Liddell is predicting another knockout win over Tito and if he performs the way he thinks he will, he has a whole list of opponents that he would be interested in fighting next.

Liddell mentioned a rematch against Quinton “Rampage” Jackson as a possibility. Rampage holds two knockout wins over Liddell already, once in Pride FC in 2003 and then again in the UFC in 2007. In fact it was the second loss to Rampage that started Liddell’s downward trajectory that ultimately resulted in his retirement three years later.

A fight with Tito is one thing. He was never really known for his knockout power. But no one is going to want to see Liddell get put to sleep again by Rampage. That’s too much. Liddell’s brutal KO loss to Rashad Evans at UFC 88 in Sept. 2008 is a scene no Iceman fan will ever forget and frankly it’s amazing he ever fought again after that. Yet he did, and he suffered two more brutal knockouts after that to “Shogun” Rua and Rich Franklin.

Aside from Rampage, Liddell also named Chael Sonnen, Vitor Belfort and Wanderlei Silva as possible future opponents. Liddell does hold wins over Belfort and Silva, and while a rematch with either of them admittedly sounds intriguing, and a fight with Sonnen seems safe enough, something about a rematch with Rampage is terrifying to think about. It just sounds like a very bad idea for the 48-year-old Iceman.

And before we line up his next opponent, Liddell still has a big hurdle ahead of him Saturday night in Ortiz. Can the Iceman do it one more time? Can he reclaim glory in the middle of the cage against his arch-nemesis after all these years? Things are different for their trilogy date and Liddell’s chin is very questionable now. Oddsmakers have Ortiz the favorite at -275 and Liddell the underdog at +235. If the Iceman can pull off the upset, then there are a few potential legends matchups that could be made. Hopefully a rematch against Rampage is not one of them.