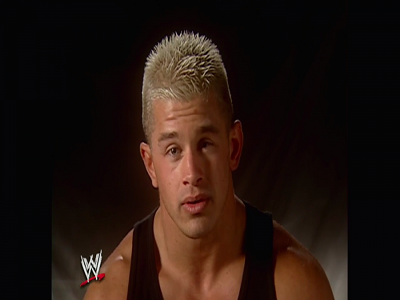 WWE almost killed a career when they put a relatively skilled MMA practitioner in a shoot match with Olympic gold medalist Kurt Angle on Smackdown. Daniel Puder (8-0 MMA) was a competitor on and eventual winner of their Tough Enough reality show and unbeknownst to WWE at the time he would be a threat in a real fight. So when they confidently put Daniel in the ring with Kurt Angle they assumed Angle would take him down and embarrass him.

Puder put Angle in a submission and looked like he was about to make Kurt tap but the quick thinking ref saw Puder’s shoulders on the mat and counted to 3. The problem was that he bridged up at 2… Even though he won via pin fall, Angle was genuinely upset from all accounts and confronted the young man backstage trying to save some face. Despite the Olympian’s complaints and later interviews claiming that using MMA submissions was not approved that is not what Daniel was told. Here’s what Puder told Robbie E about his pre-match briefing on his “Why it Ended” show…

They stated no striking but everything else goes, so specifically that was said. They just didn’t understand that I was a badass and I would have ripped Kurt Angle’s arm off like the pansy that he is. I mean, he is a wrestler, this is the difference. An amateur wrestler is not an MMA fighter, so at the end of the day he can show up and state that he is going to beat Daniel Puder up, but he is a wrestler, it is called a match, it is not a fight. Two different concepts, two different worlds, it is kind of like a motorcycle racing a Toyota; I am the motorcycle and he is the Toyota; much faster, much leaner, much younger, he is the old man, I was the young buck. He grew up and met his wife and had the all-American dream, but at the end of the day I beat him. I kicked his butt, they cheated, Jimmy Korderas saved his butt, saved his arm, and his career, I would have taken him that night because it was their rules, not mine.

What do you think of the incident?