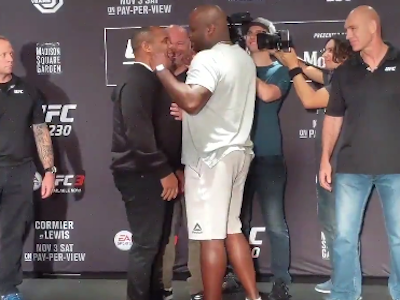 Media day faceoffs for UFC 230 took place today for this weekend’s heavyweight championship bout between champion Daniel Cormier and hard-hitting challenger Derrick “The Black Beast” Lewis. According to their stats Cormier is listed at 5’11” and Lewis is listed at 6’3″ but Cormier looks a bit smaller than that in our opinion. And he’s pretty much always the shorter guy in the octagon.

However, in addition to his height advantage Lewis also has a significant 8-inch reach advantage over the champ and with 18 of his 21 wins coming by way of knockout, and as we have seen plenty of times before, all it takes is one good shot for Lewis to change a fight into his favor. Cormier always has his patented wrestling game in his back pocket if he needs to put Lewis on the ground, but will he instead try and stand and bang with “The Black Beast”? We wouldn’t put it past the double champ. Check out the video of the two squaring off at today’s UFC 230 media day event.