Dustin Poirier recently had to withdraw from his potential UFC 230 bout with Nate Diaz or a suitable replacement for the Stockton native. The two were initially set to cap the night off with what we were all hoping would be a classic war between two fighters at the top of their game. Unfortunately when they announced that Conor McGregor would be fighting bear killer Khabib Nurmagomedov in the main event of UFC 229 he left the 230 press conference and publicly said he wasn’t fighting.

Diaz would later and now famously claim on social media that he and Dustin would be fighting for a mythical 165 pound title. Dustin chimed in and we were excited for a minute until Dana White decisively squashed those rumors in typical Dana style. It was essentially, “Alright, sit the *censored* down you goofs. There is no *censored* 165 *censored* pound *censored* title.”

The disappointment didn’t end there which takes us back to the first sentence of this article. The UFC cited an injury as the reason for Poirier’s withdrawal and until now his camp had been hushed about it. Dustin took to Twitter and updated his fans on what was going on. Check it out: 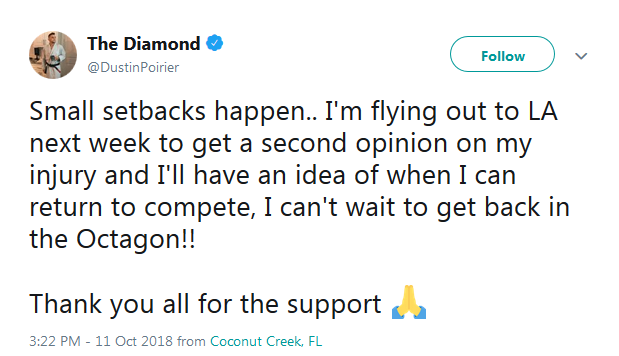 We wish him a speedy recovery. As for Diaz we are just hoping THIS isn’t true.