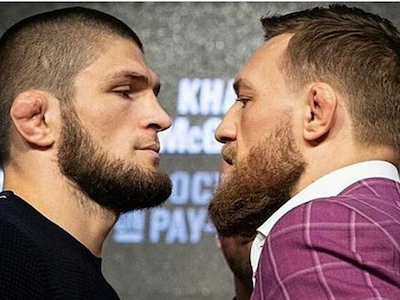 Irish cage fighter and former two-weight UFC champion Conor McGregor makes his much-anticipated return to the Octagon after almost two years since his last MMA fight at UFC 229 in Las Vegas on the night of Saturday, October 6.

The Notorious has his work cut out for him to regain the UFC lightweight belt that was stripped from him due to that long period of inactivity, however, as he battles unbeaten Russian combatant Khabib Nurmagomedov, who won the vacant title in August.

Since we last saw McGregor inside the Octagon, he was stopped on his pro-boxing debut by Floyd Money Mayweather last year. He also lived up to his Notorious moniker when attacking a bus containing fellow MMA fighters Al Iaquinta, Michael Chiesa and Ray Borg among others competing at UFC 223 back in April during a promo day in the buildup to that event.

The fallout from that saw McGregor stripped of his titles two days later after a warrant was issued for his arrest by the NYPD. Whether the bus attack was a publicity stunt or otherwise, he turned himself in, was then released on bail and his attorneys didn’t contest a charge of disorderly conduct.

All these antics aside, the Irishman is actually a betting underdog on his UFC comeback as the 11/8 outsider in the McGregor v Khabib odds on offer through Paddy Power. McGregor last fought under MMA rules 23 months ago at UFC 205 when knocking out Eddie Alvarez in the second round, yet continues to be one of the combat sport’s biggest pay-per-view draws.

Opponent Nurmagomedov hails from the Dagestan Republic of the Russian Federation and resides in Makhachkala – a city best known in sporting terms for the boom and bust of its soccer team Anzhi a few years back.

Nurmagomedov is the hot betting favorite and odds-on at a best price of 8/13 to add McGregor’s name to a list containing 26 consecutive victims. While he’s clearly a dangerous opponent, Nurmagomedov is also something of a pioneer as the first Russian and Muslim to win a UFC title.

McGregor’s own MMA record isn’t exactly flawless with three career losses, most notably to Nate Diaz via submission at UFC 196. What makes this bout so compelling is the clash of styles.

While most of the fights McGregor has won have come via knockout or TKO, the Russian has a very even split when it comes to methods of victory. Nurmagomedov has seen 10 of his 26 MMA fights go to the judges, yet stopped another eight opponents and made as many submit.

Five of Nurmagomedov’s last seven UFC bouts have been wins via decision, so the favorite’s price is boosted to 9/2 if backing him to go the distance with McGregor. The Notorious, meanwhile, is fancied most for a knockout at 7/4.

MMA fights involving McGregor tend to be ended early. Only Diaz and Max Holloway have taken the Irishman to the judges, so it’s no surprise to find a very short price of 2/9 on this Nurmagomedov bout not going the distance.