Conor McGregor is a fighter and according to any one who knows him he will square off with anyone, anytime. He trash talks at Olympian levels that make Zeus himself jealous. We all saw that at the UFC 229 press conference when he laid in to bitter rival Khabib Nurmagomedov. They will be fighting on October 6th for Khabib’s lightweight title and even though this bout may be Conor’s most important, or even biggest of his career his heart still shines through.

A boy named Bru McCulough is struggling with serious health issues so his mother, Graiine started a GoFundMe to receive better care.

Hi everyone, this is my last idea for my son as iv spent the last year trying to get him proper medical care from the hse, he has a NG tube in his nose since last September and I keep being fobbed off with excuses for delay in putting in a peg,he has seen no dietician, we are desperate at this stage , we are looking for money for my son Bryan to get private care and the help he deserves….he had sepsis last year and is now unable to walk or eat I feel so bad for him xxxxx

She received the best news she could get when this notification popped up on September 27th. 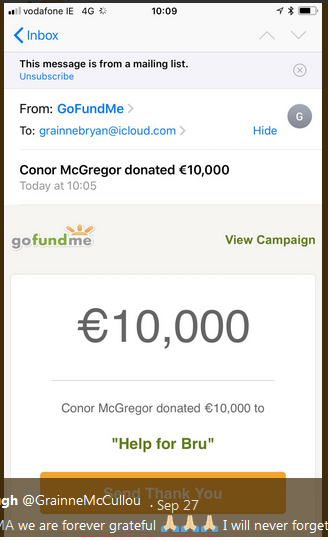 Say what you want about Conor. He’s got a compassionate side to his fierce nature.