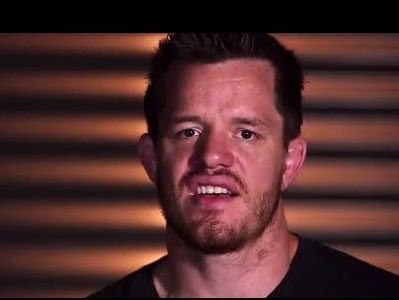 TUF 7 runner-up CB Dollaway has been fighting inside the UFC octagon for over a decade now. The 35-year-old middleweight just got back from Russia where the UFC held their first-ever event in Moscow earlier this month. Coming off back-to-back wins over Ed Herman and Hector Lombard, Dollaway faced newcomer Khalid Murtazaliev on a short-notice matchup, but unfortunately for the UFC vet things didn’t go his way this time. However, considering Dollaway was on the wrong side of deplorable late stoppage from referee Herb Dean, things could have been much worse and this could be a whole different kind of article we would be writing.

Dollaway spoke about his thoughts on the late stoppage for the first time yesterday in an interview with MMAFighting. Here’s what he had to say about referee Herb Dean’s actions, or rather lack thereof, that night:

“I’ve been on the other side before, where I thought a fight got stopped too early for me. But, being on the other side now, it’s like — it’s a rough job being a ref, they want to give you the benefit of the doubt, but at the same time, you’re there to protect us, and I don’t know what was going on, but I don’t feel like I got protected,” Dollaway told MMA Fighting. “He didn’t stop the fight. Ever. Like, he was telling me to get on the stool and I didn’t even want to fight. Like, ‘Dude, I’m done.’ I was pretty out of it. I’m going to go out and take more punishment, that’s all that was going to basically happen at that point. I understand being a referee’s a tough job, we all make mistakes in life. It just sucks when it’s you.”

“He was telling me to get on the stool,” Dollaway said. “That’s kinda the part, I guess, I have a little trouble with. When a fighter says they’re done, especially — I don’t really have to say much, the MMA community saw it, you saw it, people saw what happened, and then you have me saying I’m done, and for him to be telling me to get up off the stool, I don’t know. Thank God I knew enough was enough, or it could’ve been even more serious.

“At the end of the day, I know the risks we go in there with, but it does make me question what you’re doing. Like, for the amount of money we’re getting paid — we’re not making millions of dollars. But it’s a sport that you love. Usually [Dean] is a good ref, from what I’ve seen. I haven’t watched every single one of his fights. I don’t know, I’ve heard complaints about him, [things] other people are saying. But I don’t know, it just sucks when it’s you. That’s your health. I have a 5-year-old daughter. I want to be able to always know what’s going on and not be that out of it when I’m done with this career. It just is scary to know that, yeah, if there was two minutes left, what’s that look like then?”

Unfortunately there doesn’t seem to be any repercussions for Herb Dean as it was just announced that he will be refereeing the “biggest fight in UFC history” when Conor McGregor faces Khabib Nurmagomedov for the lightweight title at UFC 229 next month. This is the MMA world we live in at present unfortunately when the one person in the octagon who is supposed to protect you when you can no longer do it fails miserably and lives are hung in the balance. And then they are right back in there with other people’s lives and future depending on their willingness to stop the fight if they can no longer protect themselves.

We understand it’s a tough job. We understand people make mistakes. But these kinds of mistakes can seriously affect the health and future of these men and women who have families and loved ones depending on them. Then to turn around and give Dean “biggest fight in UFC history” to officiate is like some kind of reward for him and a slap in the face to the fighters.

We have reached out to the Nevada State Athletic Commission for comment and will update this article if we hear back.