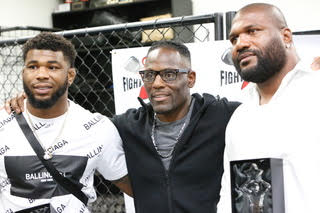 And even when I was close to defeat, I rose to my feet…

LAKEWOOD, Calif. — On Saturday Sept. 8, 2018, Team Body Shop and head coach Antonio McKee celebrated their 14th annual Fight for Kids fundraiser event. The event honored the history and the back story narrative of Quinton “Rampage” Jackson who first financially sponsored Joey “Black Ice” Davis where the prodigy first traveled the world as an international wrestling star from the city of Compton. Team Body Shop organized its fundraiser Saturday night from 6 PM – 10 PM to benefit its good cause and the Fight for Kids Youth Foundation. Together with the greater community support, Fight for Kids is invested in supporting young boys and girls’ lives who stay out of trouble, stay in school, participating in the sport of wrestling and who are involved in the community.

Few individuals and organizations ever assist the less fortunate especially many of those in need from the diverse ghetto streets of Compton and Watts in Los Angeles. Fight for Kids cultivates youth development in assisting its underserved communities taking a priority with many of its Kids in Needs by encouraging its youthful wrestlers to work towards leadership, integrity, excellence, respect, teamwork and perseverance through the character building virtues of its wrestling program. Fight for Kids offered its attendees the opportunity to bid on collection auction items which assisted its organization to support worthy causes that make a real difference in its community. Its auctions included celebrity memorabilia items like Joey “Black Ice” Davis wrestling shoes, AJ “Mercenary” McKee fight gloves followed by a special award of appreciation and gratitude, which was presented to its former Body Shop teammate “Rampage” Jackson.

Body Shop gym is centrally located in a strip mall in Lakewood, Cal. where McKee trains and houses a rich stable of future Bellator stars, including “Black Ice”, Aaron Pico, Kevin Ferguson Jr., and coach McKee’s undefeated son, A.J. McKee. Fight for Kids is a trusted charitable organization which was first founded in 2009 and is still fighting for today’s kids and tomorrow’s future as a benevolent organization which is dedicated to building youthful champions one takedown at a time.