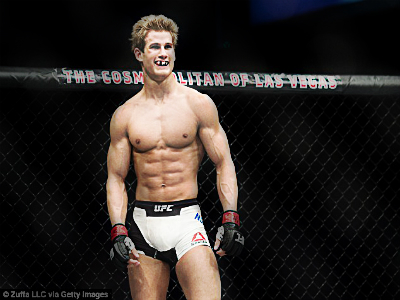 Sage Northcutt was once touted as the UFC’s new poster boy. All American good looks, great physique, and he can throw down. His hype train was quickly slowed when he lost his third fight, picked up speed again when he won his fourth, and then in a clash of rising stars he lost to Mickey Gall. He has since bounced back and won his last three but he’s in danger of becoming a gatekeeper if he doesn’t rack up a big win over a well known fighter. He opened up about his future and believe it or not he is actually contemplating leaving the UFC. Here’s what Sage said via Lowkick MMA.

For the UFC to re-sign me, I think that would be something that’s great. I don’t see why they wouldn’t try to offer something, so I’m just waiting to find out. But, I think me being young—I’ve only had one year total of actual MMA training if you look at it. So I consider my MMA training started the day I stepped foot in Urijah Faber’s gym.

I am a free agent, yes sir. I’m not sure how it works, what my contract says or anything, but yes I am a free agent now. I know that going to other leagues like Bellator or ONE FC. That guys or friends of mine, for example Rory MacDonald, people that fought for the UFC like Machida. They’re making double if not triple what they were making fighting for the UFC.

I don’t want to say underpaid. The UFC and the sport of MMA, it’s not about just talent, which I wish it was. The hard work, the grind, the energy that you put into it and how you perform out there. It’s not just about that and you could be a top ten guy. Maybe fans don’t tune in and watch some of the top ten guys.Because they haven’t even heard the guy’s name.