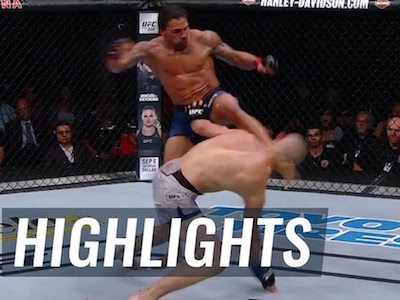 UFC Fight Night 135 took place over the weekend in Lincoln, Neb. The event saw plenty of stoppages including lightweight contender Justin Gaethje’s first-round knockout of James Vick in the main event. However, none of the stoppages of the night were more impressive than Eryk Anders’ devastating head kick KO of Tim Williams that opened up the main card on FS1.

Andyrs is still relatively young in his pro MMA career at 11-1, however, seven of those 11 wins have been by knockout and he just picked up his second finish inside the octagon since joining the UFC in July of last year. The 31-year-old Spartan Fitness product came off a controversial split decision loss to legend Lyoto Machida back in February but rebounded spectacularly with this highlight reel finish of Williams.

With timing and kicking ability like he showed on Saturday, one might reckon Anders came into MMA after a successful English football career where he excited fans and earned big money for bettors on 10bet. However, prior to mixed martial arts, Andyrs actually played American style college football for the renowned Alabama Crimson Tide team and helped lead them to a National Championship in 2009.

Although he played the position of linebacker, you would think “Ya Boi” was a former field goal kicker with the way he punted Williams’ head nearly clean off. Some fan watching cageside in the first few rows that night almost went home with a newly severed head as a souvenir. Take a look!