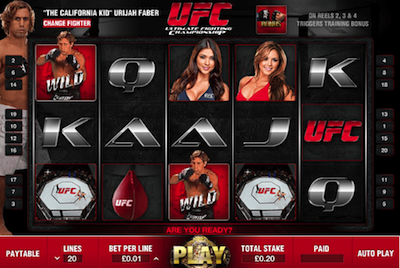 It is no doubt that MMA has seen enormous continued growth in the past few with superstars such as Conor McGregor and Ronda Rousey (who later moved to WWE) elevating UFC to new heights. On the other side of the coin, boxing has also experienced a renaissance in popularity with World Heavyweight Champion, Anthony Joshua becoming the latest household name to win the hearts of fans around the world and putting boxing back on the map.

Therefore, it goes without question that the resurgence of popularity in professional fighting, regardless of discipline, has ensured that a swathe of companies is bringing the fight to you. With fighting themed slot games, you can combine the thrill of placing a flutter on an upcoming duel with the chance to prove your skill in the ring while avoiding a knockout blow.

In at the top of our list is undoubtedly the UFC slot machine game. With the UFC now valued at an estimated $7bn, it is no surprise that Endemol, the developer of some of most popular slot machine games in the market have designed the game around the aesthetics of the elite MMA series.

Since its release, the game has aided to the success of UFC within betting outlets around the world, whetting the appetite of fans in the lulls between shows. UFC is a quality slot machine title that is aimed at the more hardcore, seasoned fan with betting is as hefty as the fighters on display, with the maximum bet of up to £500 per spin.

The game sets off by allowing you to choose your favourite fighter to bring home the title. Bonus rounds and opportunities to gain free spins are included to enhance not only the opportunity of a win, but also adding to the authenticity of the series’ real-world unpredictability and fast-paced nature.

Undoubtedly, UFC is a game built for fans of the series and MMA fighting as a whole. For new players, be sure to brush up on your knowledge of UFC to fully immerse yourself in the world of officially licenced slot machine gaming. 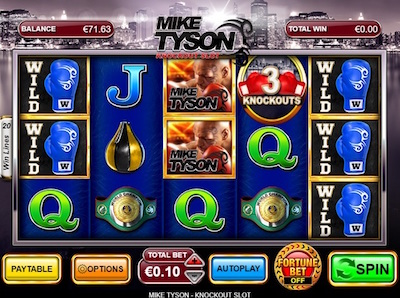 It’s not often we see a celebrity-fighting themed hybrid slot machine game, but having a boxing legend none other than Iron Mike is the recommendation that boxing fans wish for in a heavy-hitting challenge for the Heavyweight Title in Mike Tyson Knockout Slot.

Released in 2016, Mike Tyson Knockout Slot is a fun and authentic slot machine game that is aimed at the casual boxing fan and boasts impressive graphics. The game is widely available on 25-English language casino sites, each with impressive offers including welcome bonus spins to get you started without spending too much of your budget early on.

The player joins Mike in the ring as a challenger for the accolade of the Heavyweight Title and gives you the chance to land some of your hardest punches possible en route to victory. Along the way, there are opportunities to win big in tough Knockout bonus rounds, in which an almighty multiplier and free spin offer is up for grabs. Win the round, and you could not only defeat Mike Tyson, but win 12 free spins with a 10x multiplier. What is not to love? 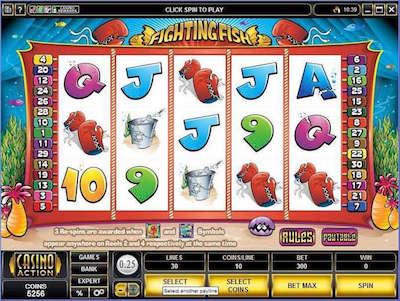 Fighting Fish is the ultimate ‘just-for-fun’ fighting slot machine game. No professional endorsements here, but knowledge of boxing basics and the will to win is certainly required. Fighting Fish swaps the glitz and glamour of Madison Square Garden, and the Octagon of UFC for an undersea boxing theme.

Despite being themed in a fantasy setting, there are nods to real world boxing such as the Blue and Red corners, represented as fish here. These are our multipliers in Fighting Fish, and if you play your cards right, you could land yourself 3 free spins.

In addition, the flower-cornered boxing ring represents the chance to play for the biggest pay off in Fighting Fish, Gamble. The Gamble mode swaps out boxing for the thrills, risks and rewards from all well-known card games. Gamble gives you the opportunity to go all in and potentially quadruple your winnings by guessing the correct card colour and suit. Get it wrong though, and you go home empty handed.

Despite not being billed as a serious boxing game on paper, Fighting Fish still delivers the fun and trepidation associated with fighting slot machine games and is a favourite amongst punters and fighting fans alike. 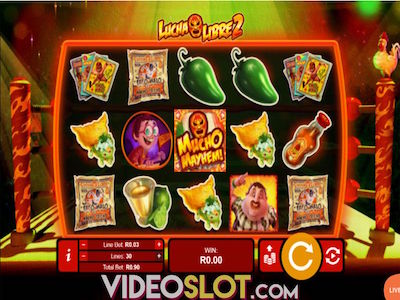 It might not have the glitz and glamour of WWE’s Wrestlemania, but our only wrestling-orientated slot machine game in this list comes in the form of the latest instalment of the Lucha Libre series, Lucha Libre 2.

Released in May 2018 after the success of the original title, it once again sees you take on the role of a fearsome Mexican Luchador. Unlike the action in the ring where championship belts are up for grabs, the main prize on offer is a heavyweight jackpot.

Lucha Libre 2 supports impressive features such as mobile gaming as well as advanced sound effects for a more immersive experience over its predecessor. Bonuses such as the ‘Time to Rumble Feature’ allows you to pick your best fighting move to defeat your opponent and if you’re successful free games will be added and multiplied. 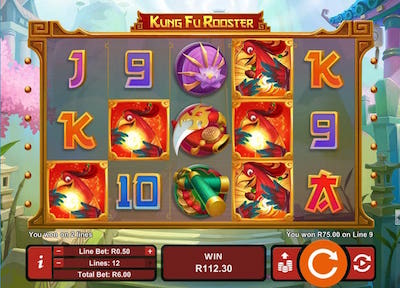 Kung Fu Rooster is a hit amongst fans as its advanced graphics and exciting bonus features weaved into the theme of Chinese Kung Fu Fighting makes for an excellent and enjoyable experience.

It serves as a great starter game for those interested in fighting slot games, with the opportunity to play Kung Fu Rooster on mobile, so you can tap and spin anywhere, anytime either with real money or just for fun.

For those experienced slot machine players, you can win up to 25 free spins and increase your multiplier with each free spin for a high-stakes chance to take home a big pay out.