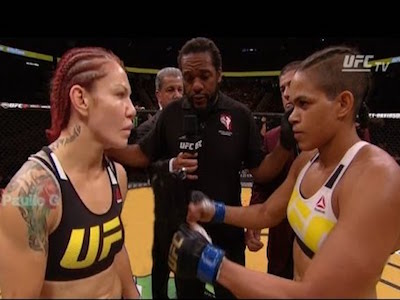 UFC featherweight champ Cris Cyborg and bantamweight champ Amanda Nunes were rumored to throw down at UFC 228 in Dallas. Then Amanda Nunes wanted the bout pushed back to UFC 232 in December. As we all know Cyborg is a fighter who wants to stay active and let’s be real and say fighters need and want money. This is a huge fight and could do decent numbers on its own but should you pair it with another big fight then it would probably help PPV buys even more. It doesn’t really matter because Cyborg isn’t happy at all going by what she told MMAFighting.

Cyborg isn’t happy about this.

Amanda has talked a bunch of stuff, saying she couldn’t fight, that she was injured and would take her six months to recover. She challenged me in January and said she’s injured and needs some time. Ok, fine, but I’m a champion in my division and I’m always fighting.

She’s used to fighting only once a year, but I’m ready to fight now. It’s been four months since my last fight, and I’m ready. There’s no excuse. ‘Oh, but there aren’t opponents for you.’ There are. If you look out there, there are. I’ve always fought in Invicta and always had opponents.

Cyborg also said she was disappointed that the UFC hasn’t been able to produce enough opponents for her to defend against.

My job is fighting. I want to fight. I don’t want to stay out for almost a year in my prime. I think it’s disrespectful. … Dana took Colby Covington’s belt. He won that belt two months ago and was stripped because Woodley wants to fight and he’s injured. How about me, who wants to fight? She challenged me six months ago and still needs six months? She said she’s going to travel with her girlfriend. No problem with that, but I’m ready to fight. A champion must be ready at all times. I want to fight now, and when she’s ready we can fight.

It’s not a good idea to make Cyborg mad…