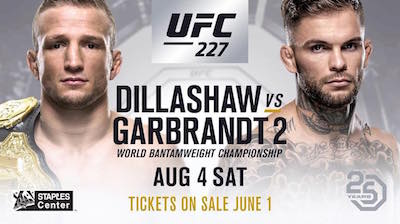 The UFC will hit Tinseltown on Saturday, August 4th in the Staples Center Arena. Despite that fact that there has already been drama a-brewin’ over the pullouts in light-heavyweight, UFC 227 still rocks, and there is plenty of competition worth watching.

Benito Lopez and Ricky Simon make up the Bantamweights that we see on the UFC 227 main card. Simon is the -200 favorite in this fight but, Benito Lopez is a qualified dog. If you are unfamiliar with odds, take a quick second and see how to bet for a fast breakdown.  Lopez is 9-0 and coming off an impressive win against Albert Morales. Simon will be looking to put a scar on Lopez’s record, and the sportsbooks in Vegas seem to think he can do so, but I am going to take the dog in this fight.

Cub Swanson is an experienced UFC veteran with 34 fights under his belt. But Renato Moicano is the far and away favorite. Some shops have Renato as high as 1 to 5 (-500). Cub is by far the more experienced fighter, but he is coming off back to back losses, hence the lack of love from Las Vegas. Both of these fighters lost to Brian Ortega recently, and While Swanson followed that loss with another to Frankie Edgar, Moicano got one back with a win against Calvin Kattar.

It could be that at 34 years of age, Swanson has lost a step, but Frankie Edgar is a wholly different level of fighter that Calvin Kattar. So, I don’t give Moicano’s latest win any points against Cub Swanson. Swanson has a better resume, and he needs to get back to winning. Plus he has serious value at +350 (3.5 to 1). This is going to be an amazing fight.

The Brazilian is once again favored here, but only moderately at -240. The American has a chance if she can turn this into a stand-up brawl and control the distance and pace. That said, The “Dama de Ferro” or “Iron Woman” is a fantastic submission artist. She also has more experience in the big time than JJ so; I predict that this goes down to the matt and at one point or another, Viana is going to submit Aldrich.

Mighty Mouse has already destroyed Henry Cejudo in a first-round victory. There is nothing new added to “The Messenger’s” style or resume that tells me anything different will happen. Perhaps he’ll be more measured and cautious and get destroyed in the second round instead of the first. Mighty Mouse is the overwhelming favorite; as high as -700 or 1 to 7, and for a good reason.

When we check the best online sportsbooks, both of these guys are complete fighters. Each is excellent on the ground with fantastic wrestling skills, and both are elite strikers. I give Dillashaw a slight edge in grappling. And this might seem counter-intuitive because of the outcome of Dillashaw-Garbrandt-one, but I think Cody Garbrandt is a slightly better striker. His hand-speed and head movement are a bit better than TJs.

For this reason, Cody “No Love” is getting some love in Vegas and this fight is lined out very tight.  Dillashaw is a slight favorite, but Garbrandt is still found at even money. Even though I do believe Cody to be the better striker, in this specific matchup, I think his head movement might put him in trouble again. Dillashaw is great at tracking, and I wouldn’t be surprised to see big shots landed from both fighters, but I think Dillashaw will find a button-shot in the second or third round that he can turn into a finish.  The fight could go exactly the opposite with Garbrandt landing a chin-bomb, but I think TJ goes up 2-0 in this rivalry.