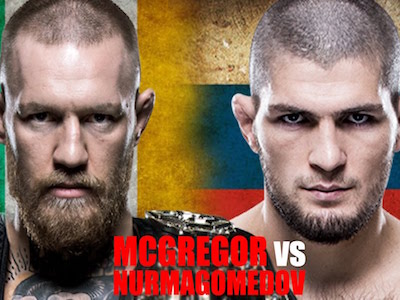 There’s no definitive date yet for the return of Conor McGregor to the UFC octagon. However, all signs are pointing to a showdown against unbeaten lightweight champion Khabib Nurmagomedov when “Notorious” does make his return. The former two-division champion has been enjoying spending time with his newborn son and using that Floyd Mayweather money to spend in his legal defense for that bus attack in Brooklyn earlier this year.

McGregor won the UFC lightweight title after knocking out Eddie Alvarez at UFC 205 in Nov. 2016, but never defended the belt and hasn’t fought a mixed martial arts bout since. Instead McGregor opted for the big money fight and made his pro boxing debut against unbeaten legend Floyd Mayweather Jr. on Aug. 26, 2017, where he reportedly made around $100 million.

With that kind of payday against Mayweather it’s understandable why McGregor hasn’t returned to the octagon yet. But all signs are pointing to his return and he certainly has his work cut out for him if he aims to reclaim the lightweight title currently held by the 26-0 Nurmagomedov.

It’s quite understandable why Khabib is considered the favorite though the lines are closer than some might expect. No one has been able to withstand Khabib’s wrestling game and he uses it to wear his opponents down, and over 25 minutes in a title fight, it gets even worse for his opponents as the clock moves on. Having said that, he did show holes in his standup in his short notice fight against Al Iaquinta at UFC 223 in April. And Iaquinta showed his takedowns could be stuffed too, at least for a time. Eventually though, as he always seems to do, Khabib wore him down.

Ten of Khabib’s 26 wins have been by decision, with eight also coming by knockout and eight by submission. But the wrestling and grappling are his bread and butter. Conor has finished 18 of his 21 victories via knockout, with one also coming by submission and two by decision. Conor’s bread and butter is his striking and he’s so good with it and has had such success with it that it’s made him the highest paid MMA athlete in history. Will all the money soften the “Notorious” one though? Will he be as hungry? And can he stop the relentless grappling of “The Eagle”?

If Conor can at least find some success stopping the takedown, he will have the opportunity to do what he does best and hurt Khabib on the feet. He’s got great power in those Irish fists if he can find his target. We’re waiting with bated breath.