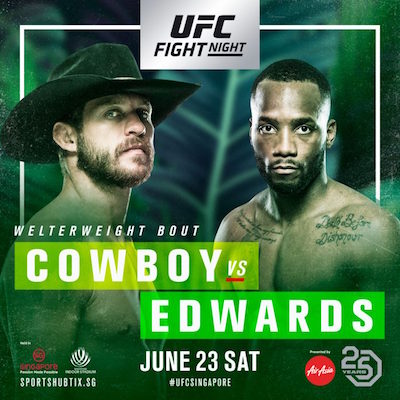 UFC Fight Night 132 will take place on June 23 in Singapore. It’s a Fight Pass-only card and is headlined with a welterweight matchup between No. 11 ranked Donald “Cowboy” Cerrone and No. 13 ranked Leon Edwards. The co-headliner has No. 7 ranked light heavyweight Ovince Saint Preux taking on No. 13 ranked 205-pounder Tyson Pedro.

The betting odds for the main event currently have Edwards as the favorite at -200 and “Cowboy” Cerrone coming in as a +170 underdog (via 5dimes). These odds are understandable as Edwards is currently on a five-fight winning streak, most recently stopping Peter Sobotta via TKO in March. He’s also posted victories over Bryan Barberena, Vicente Luque, Albert Tumenov and Dominic Waters during this streak.

Cerrone has faced some stiffer competition as of later and he suffered consecutive losses to Jorge Masvidal, Robbie Lawler and Darren Till in 2017. However, Cowboy rebounded with a first-round stoppage of Yancy Medeiros in February and appears to be back on track. But we have to remember he’s been in a lot of wars, and two knockout losses in 2017 is not a trend we like to see. Edwards, on the other hand, has never been stopped in his seven years fighting as a professional mixed martial artist. He’s also nine years younger than the 35-year-old Cowboy.

The oddsmakers currently have former title challenger Saint Preux the underdog at +130 and Pedro the favorite at -161 for the co-main event (via William Hill). Now this is one underdog bet worth taking a second look at.

Despite both fighters having a loss to Ilir Latifi in common, Saint Preux is by far the more experienced mixed martial artist in this  matchup and he’s faced the cream of the crop of the light heavyweight division over the years. Pedro is nine years younger than the 35-year-old former University of Tennessee linebacker, however, he’s only had eight professional fights, with his only loss coming via decision against Latifi last September.

Pedro has posted first-round victories over Khalil Rountree Jr., Paul Craig, and most recently Saparbek Safarov, since making his octagon debut in 2016. Saint Preux had a trio of stoppage victories himself in 2017, including a pair of Von Flue choke finishes against Marcos Rogério de Lima and Yushin Okami, as well as a head kick KO of Corey Anderson. However, OSP was submitted by Latifi in February and that is likely a main determining factor the oddsmakers are using to put him as the underdog.