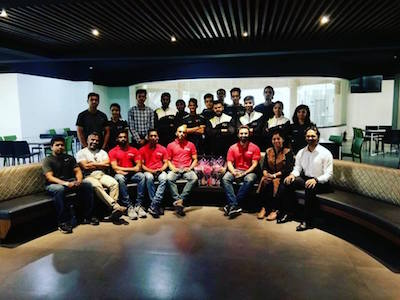 DY Patil Medicine College located in Nerul Navi-Mumbai is one of the few institutions of India which provides a detailed study in the field of sports. A part of the prestigious DY Patil group of colleges, the Medical College is a part of the DY Patil Navi-Mumbai campus. Frank Mapranny, strength and conditioning coach at Superhuman Gym, who also happened to be a guest lecturer at DY Patil College, decided to bring in team Superhuman to DY Patil. Hence Superhuman Gym co-owner Somesh Kamra, first ever Indian UFC fighter Bharat Kandare, Ganryujima fighter Aditya Katkade, and kickboxer Pratiush Sharma were invited to answer questions about the sport of MMA and what went behind in getting a fighter to the UFC. Frank said, “It is theory meeting practical application. They understand the theory behind the making of an athlete but simply studying doesn’t answer all the questions. Theory is based on ideal situations; in reality situations are never perfect.”

Datta Patel, Program Coordinator, Bachelor of Sports & Exercise Science, School of Medicine, DY Patil University, Navi Mumbai, added, “In future they will be working with athletes, so they need to know what exactly real life situations are like. Also MMA is a very new sport. I doubt there is a person who can explain the technical nutrition and support system an MMA fighter needs. This is another reason why we wanted the seminar to be conducted. It is important that these students are aware about rising sports.”

Over 20 students pursuing Bachelors in Sports and Exercise Science had gathered to be a part of the seminar. Despite coming from different semesters, sporting backgrounds and specializations, all of them had one integral constant question in their eyes: Why MMA? Why did they all select MMA as a career? MMA had zero grass-root reality as a sport in India. No one so far in India has developed the basic mechanism of MMA around which the sport works. So why would someone take this sport up? How did they even get involved in MMA?

The pin-drop silence resonated mixed with their gaze to make it very obvious that they were interested in knowing the back story of all these athletes. Bharat Kandare, current UFC fighter, said, “I have trained in various forms of combat sports. I was a skilled mud wrestler and had also trained in boxing. However, I had doubts if I could ever grow as an athlete in these sports. That is when I came to know about the sport of MMA and decided to try my hands on it.” Pratiush on the other hand just wanted to improve his skillset. “I used to practice kickboxing. So to test my skills against other martial artists I decided to take MMA,” he said. “I did not want a one dimensional combat sports career.” Aditya was inspired by Bharat’s success. “After seeing what Bharat sir had accomplished I decided to try my hands on MMA.”

Support from family and resources

Support from family is one of the simplest forms of support one needs. However, in India sports as a career option isn’t really something most parents support. Both Bharat and Pratiush had same situations. Bharat explained, “My parents did not support me early in my career. However, after seeing my successful run in SFL (Super Fight League) they were convinced that I could make it to the top.” Adding on Somesh stated, “Support is something which is earned. If you talk about a sport like MMA, you talk about an environment where opportunities are bare minimum. So it isn’t surprising that his parents did not support him.”

Opportunities usually depend on the resources one’s surroundings can provide. Hence, when we accept the fact that opportunities were scanty then it is kind of obvious the resources required were not available in India. “When you talk about Indian MMA fighters, you talk about self-made personalities,” Somesh said. “In other countries people have basic resources like having a proper training team and a stable income. In India that isn’t possible. Indian MMA fighters, like Bharat, have invested a lot on themselves to reach this point where they can compete against international fighters.” The problem didn’t end there. Adding on Frank said, “We can bring in the resources required to build an MMA fighter, but the problem is that we don’t have any sponsors. We don’t have the funds required to build the resources.”

Economical position of MMA in India

MMA at the present moment in India has no sponsors backing it. There are mega companies who have associated themselves to promotions like SFL but have not really invested money in fighter development. “MMA community in general doesn’t generate money. At the beginning it was just us pumping money in but since Bharat’s fight in the UFC we have had a few sponsors with us,” explained Somesh. The problem of developing resources to create quality MMA fighters too is something team Superhuman wants to counter. “We are making our own gym in Manipal. We have joined our hands with one of the best MMA gyms in the world, Jackson-Wink to create the fighter development program. One aspect of this strategic tie-up is that it relieves the fighters from the training cost completely, which is huge. We also have arrangements for stay at the JacksonWink MMA Academy dedicated for Superhuman fighters. The fighters only have to pay for air fare and food if they want to train at the world famous JacksonWink academy. As far as India goes, we plan to get down the best fighters and coaches for seminars, camps and interaction with fans and budding fighters. Being a part of Superhuman, they will get this at a discounted rate. The rest have to bear the entire cost.” This move has layers to it and is expected to be the push Indian MMA needed.

Mental strength is something not many coaches acknowledge the importance of. In fact in India most sports don’t even have the field of sports psychology as a part of training. Adding on Kaustubh said, “In India people do not understand the psychological aspect of sport. Having the proper mental coaching is necessary to survive in the sport.” Adding on Datta madam said, “People invest in a lot of money in coaching, failing to realize that nutrition, planning and mental coaching all are important aspects of sporting. In fact, apart from cricket and badminton there are no sports in India which have a defined mental coaching program.”

When you talk about combat sports, you talk about a game which requires a lot of self-confidence and mental strength. One needs to be coached in every field. Frank said, “We provide nutritional as well as mental support to our athletes. I am a trained physical strength and conditioning coach, MMA as a concept is new to me but thanks to constant support from Somesh we have managed to develop a mental strength program and have a proper nutritional guide for all of our fighters.”

Fighters have their own mental “zone”. Frank made it very clear that he did not disturb their program, in fact his program made it easier for them to get in their “zone” where they could compete. Opening up about his mental state during fight camp, Bharat said, “I visualize. I put headphones on and visualize myself doing moves. I see myself winning the fight and try to become calm.” Where Bharat chose music, Pratiush chose silence. He said, “I usually go into deep meditation and try to become calm. I use pranayama to make body still and ready for fight.”
Somesh added, “Each fighter has their own requirements and mental state. No two fighters will ever have the same mental program or same nutrition. Some prefer to stay alone while others want constant company. Some stress sleep while others become insomniac. Each fighter needs to be studied before a mental program is created. We are, I guess, the only gym which provides this support.”