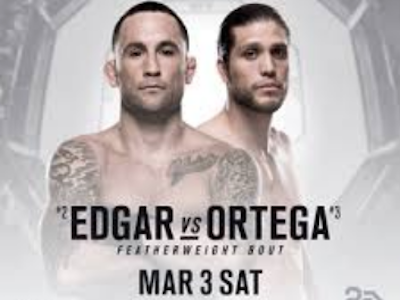 Frankie Edgar (22-5) is one of the most well-rounded fighters the UFC has ever known and is still near the top of his game at age 36, losing just once in the last five years. While Brian Ortega has never actually lost in the octagon (13-0, 1 NC), Edgar represents a step-up in competition for the 26-year-old, and Ortega doesn’t possess the elite standup game that gave Edgar such problems in his setbacks to Jose Aldo and Benson Henderson.

Edgar is a deserving -185 favorite according to SportsBettingDime.com, especially with Ortega coming in on short notice and as UFC 222 approaches more odds will be posted here in this MMA betting section, which not only covers UFC but other MMA promotions you can bet on.

Edgar is currently ranked No. 2 in the 145-pound division and is coming off a TKO win over Yair Rodriguez at UFC 211 last May. Prior to that he won a unanimous decision over Jeremy Stephens in Nov. 2016. He has challenged for the UFC featherweight title twice and is a former UFC lightweight champion.

Ortega is currently ranked No. 3 in the division and is on a five-fight unbeaten streak inside the octagon — all by stoppage. He’s coming off a submission win over Cub Swanson at UFC Fight Night 123 in December. And prior to that he stopped Renato Moicano via submission last July.

“T-City” has also posted stoppage victories over Clay Guida, Diego Brandao and Thiago Tavares inside the octagon since making his debut with the organization in 2014.

Both Edgar and Ortega are BJJ black belts, but Ortega has a much higher submission finishing ratio having stopped exactly half of his 14 pro MMA fights via submission. More of a grinder and footwork guy, half of Edgar’s 22 career wins have been by decision. This one should be an interesting clash of styles and will prove if Ortega is indeed ready for the Jose Aldos and Max Holloways of the world.

UFC 222 will take place March 3 from T-Mobile Arena in Las Vegas. Edgar-Ortega will serve as the co-main event, while Cris Cyborg defends her women’s featherweight title against Yana Kunitskaya in the main event.