Anthony Joshua, the present IBF and WBA heavyweight world champion is in with a chance to add the WBO title also to the list of his achievements when he faces Joseph Parker on March 31st at the Principality Stadium in Cardiff, UK.

It is expected to be an intense showdown and there’s already a good amount of Joshua Parker betting action happening at both off-line and online bookmakers. While Joshua opened up as 1/12 favourite for this bout, expected to easily extend his unbeaten run to 21 wins, Joseph Parker has received 6/1 odds to cause an upset and walk out of the stadium with all the Joshua’s belts.

Look at the past records

Going by both the boxers’ records, it goes without saying that Anthony Joshua is far more experienced and has faced more difficult opponents in his career so far. He has beaten some of the boxing greats including Wladimir Klitschko, Dillian Whyte, Eric Molina and Charles Martin.

Joseph Parker on the other hand has only beaten one big name -Andy Ruiz to win his WBO title in late 2016. 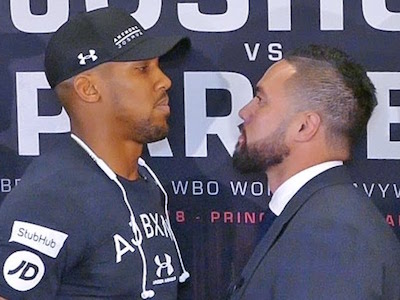 Go for the victory market

Many people are backing Joshua 1/4 to win this fight easily by stoppage. It should be noted that all the 20 Joshua wins have come by the way of technical knockouts and knockouts. Thus, it’s pretty hard to see how Parker would survive 12 rounds in the ring with the 6’6” champion. Hence, anyone wanting to back Joshua in the betting market should look at the victory market first. If Joshua manages to connect, it would be only a matter of time that Parker might start wobbling and give in.

Punters looking for a bigger share in the betting market should try their hand at round betting. You can expect Joshua to give Parker plenty of respect during the initial few rounds, as the latter’s also a world champion in his own right. Thus, it’d make more sense to go after the middle rounds while indulging in round betting market. It’s worth noting that Joshua stopped both Dominic Breazeale and Dillian Whyte during the seventh round, which is being offered at an attractive 8/1.

You can even punt on the total number of rounds. At present, the mark has been set at 8.5 rounds. You have the option to go after over at 11/8 and under at 8/15. Please note, only two men have managed to push Joshua past 8.5 rounds in the past, Carlos Takam being the last one in October 2017. Hence, under 8.5 should be your pick right away.

A victory over Joseph Parker would allow Joshua to secure a fight with Deontay Wilder sometime during summer 2018, where he would then put all his four belts on the line. Both Joshua and Wilder are big hitters, so you wouldn’t want to miss that bout for sure! As of now, every one’s focus is on Joshua vs Parker, where the former is highly expected to extend his unbeaten record.