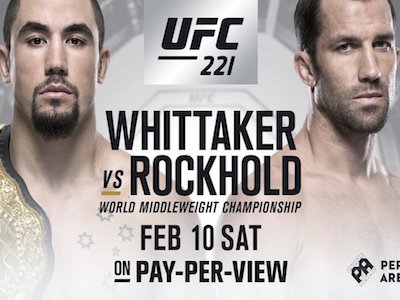 UFC 221 is slated to commence soon on February 10th in Perth, Australia. This will be the first UFC event to be hosted in Perth. The headliner fight is to a middleweight class competition between Yoel Romero and Luke Rockhold. Along with this fight will be 11 other fights of varying classes.

Sports bet sites have been taking bets already on the outcome of the main card fight between Romero and Rockhold. Currently, the odds at major bookmakers favour Rockhold with a money line set at -120. Romero is the underdog with a betting line of +115. The lines are rather close which indicate that the match should be quite competitive and one for spectators to revel in viewing.

Cuban fighter, Yoel Romero, has fought in a total of 14 MMA fights winning 12 of them.  In 2000 and 2004, Romeo represented his home country in the Olympics earning a silver medal in freestyle wrestling in 2000. He also is a former champion of amateur wrestling. Currently a member of the UFC, Romero’s most recent competition was a loss to Robert Whitaker last year.

Romero’s competitor, Luke Rockhold, is a former UFC Middleweight Champion. Currently, Rockhold ranks second in the weight class. Over his career, Rockhold has been featured in 19 fights, winning 16 of them. Rockhold was originally supposed to face Robert Whitaker at UFC 221. However, Whitaker has to withdraw from the competition due to a staph infection. As a result, Yoel Romero was selected to take Whitaker’s place.

Since Romero and Rockhold have never faced one another, there isn’t a past record to help make a prediction of the bout to occur in UFC 221. Despite this, many cite Rockhold’s original inclusion in the fight as a sign of his prowess and potential to win the fight. Along with this Rockhold’s second place in the weight class also provide further evidence to support his higher possibility of winning.