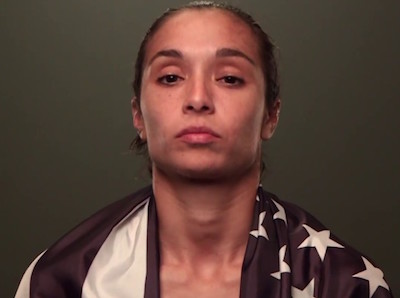 Ashley “Smashley” Cummins improved her record to 6-4 at Invicta FC 27 with an impressive win over Stephanie Alba. The St. Louis area police officer bounced back from a close decision loss to Jinh Yu Frey with this win. “Smashley” recently took time off to answer a few questions and opened up about low times, her future intentions in the sport and more.

How did your journey as an athlete begin?

I’ve been involved in sports since I was little. When I was 5 years old I started taekwondo and soccer. When I got older I also played basketball, softball, and rugby. I have always been an athlete and love to compete.

Was there someone who influenced or inspired you? When you look behind and realize that this is how far you have made, how does it feel?

I would say my biggest influence growing up were my parents. They taught me to never give up on my dreams no matter how many bumps in the road I encounter.

It’s honestly surreal to be ranked in the top 10 in the world in my weight class (105lbs). I think a lot of people would have quit the sport by now if they went through everything I have gone through. In 2013 I fought Joanne Calderwood and got three broken orbital bones in that fight and lost my vision. I had to have surgery and get a metal plate in my face to be able to restore my vision. After that loss I went on to lose three more fights (at 115lbs), with my fourth loss being on The Ultimate Fighter. I think a lot of people would have quit after going through surgery and losing four fights in a row. I came close to quitting several times. I am proud of myself for not quitting and continuing to pursue my dreams despite facing all of that adversity.

Did people around you support the decision of taking this sport as a career? What are the biggest challenges that you have faced? An opinion which comes out again and again is that MMA isn’t meant for women. As someone who practices MMA, what are your thoughts on the thoughts of people who refuse to accept that women too can fight?

During my amateur career my parents at first didn’t want me to fight because they were worried about possible injuries, but now they are my biggest fans and continue to encourage me to keep going in the sport no matter how many bumps in the road I have.

I would say the biggest challenge I have faced is the mental part of this sport. Especially after losing four fights in a row my mental game wasn’t the best. I had to dig deep to believe in myself again and start my quest at a new weight class (105lbs).

I think people who feel women don’t belong in the sport are narrow minded. Female fights are some of the most exciting and action-packed fights on cards. Women have proven themselves over and over for years now. We work just as hard, we sacrifice just as much, and we put on some damn good fight. We belong in the cage just as much as the men do.

You had an all time career low run back in 2015-16 where you went on a three-fight losing streak. How did you keep your confidence up? What was it that kept you moving even back then?

I actually had a four-fight losing streak with the fourth loss being a exhibition fight on Ultimate Fighter. My confidence was low, but I knew I wasn’t done. I knew I had to make some adjustments to be able to move forward. My friends, family, and teammates kept me going when I was ready to give up on myself. After taking some time off and doing some soul searching my coaches and I decided that dropping a weight class was the right move.

In your last fight you faced Stephanie Alba. You were coming off a loss to top contender Jinh Yu Frey. Did you feel any kind of pressure? What was going through your mind?

I knew if I lost to Alba my chance at fighting for the Invicta atomweight title would be gone. I knew I needed a win to get back on the winning track and continue climbing towards a title shot. I knew I was overall the better fighter, but anything can happen in this sport, so the pressure is always there no matter who you fight. I never look past any opponent.

You are a police officer. How do you balance your work life and MMA career? The entire police department has come under a lot of political talk and has received both criticism and praise from both liberals and conservatives. How do you deal with all of this?

At times it is hard to balance being a full time police officer and professional MMA fighter, but after over seven years as an officer I have a good routine going balancing both careers. Of course it would be better for my MMA career if I could train full time and focus on MMA, but that doesn’t pay the bills. I love being a police officer and I love fighting MMA so I consider myself lucky to be able to have two full time careers that I love. I think that balancing both careers, with my law enforcement career being a dangerous one, makes me only stronger mentally in the cage.

What are your next plans? Any opponent in mind?

I am hoping to get one more win in the Invicta cage and after that getting a title shot. I’ll fight any one, but I would prefer my next opponent to be ranked in the top 15.

You have been a part of the MMA world for some time now. What are your thoughts on the evolution of women’s MMA? Do you think that women MMA fighters have cemented their spot in the main stream media? Have you ever found it difficult to get recognition in MMA world because of being a woman?

I have been in this sport for 10 years now and it is amazing how far women have come in MMA. When I first started it was rare to see a female fight on any promotion. The only promotion having women fights was G Fight Summit. Now women fight for and often headline every major promotion around the world!

I think most fans love seeing women fights on every card, and we have gained respect around the world. I have never felt like I haven’t gotten recognition in this sport because I am a woman. I have always received respect from every promotion I have fought for and all the fans.

Whom do you think are the top 5 greatest women MMA fighters of all time, women who have not only given exemplary performance in their fights but have also helped in the growth of the sport and have made it possible for women to have their place in some of the biggest MMA promotions? Why?

I would have to say the top 5 women that have helped grow this sport and have given women the recognition they deserve are Rhonda Rousey, Tara Larossa, Shayna Bazler, Julie Kedzie, and Gina Carano. Larossa, Bazsler, Kedzie, and Carano were all the big names years ago when women fights were few and far between. I credit Rousey for women finally being in the UFC.

The UFC currently doesn’t have an atomweight division. Will you move up a weight class if given a chance to compete in the UFC? Why?

If UFC asked me to fight at 115lbs I would do it. It’s always been my dream to fight for the UFC, and I can’t count on them starting a atomweight division anytime soon, so I would move up in weight to be able to experience being in the UFC and reach that goal.

Who is the best opponent you have ever faced? What made them the best you have faced?

I would say the best opponent I have ever faced was Alexa Grasso. She was very well rounded, skilled, and strong.

I think the pay made be the average fighter does not match the amount of hours spent training, dieting, and preparing for fights. That is the main reason I have another career and don’t train and focus on MMA full time. I wouldn’t be able to pay the bills on my fighting salary alone. I am in support of a fighter union.

No matter how many set backs or bumps in the road you get, never give up on your dreams. You don’t want to go through life wondering “what if?”

I’m so thankful for the support of all my fans. I am so humbled by the amount of people that support me and reach out to me. I’m going to continue to bring exciting fights to the cage, and will always honor all my brothers and sisters in blue.