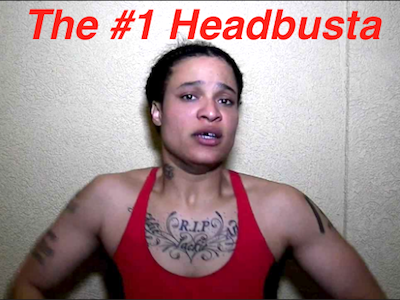 At 8-1 as a professional Jozette Cotton is one of the best female fighters of the heavier division today. The Dynasty Combat Sports lightweight champion had an amazing 2017 where she went 2-0 and won the DSC lightweight title. She will take on Leah Letson on March 3rd for the DSC featherweight championship. Ahead of the fight she answered a few questions about the matchup, her thoughts on her last fight and why she’s glad Holly Holm lost to Cris Cyborg.

With Norris I felt my performance was okay, I would have loved to be a little flashier but I’ll save that for my next opponent. Norris is a beautiful person inside out, understood my weight cut, and stood with me like a champ till she could no longer. Great fighter she is.

Last time you tried moving down to 145 pounds. There was problem revolving around the weight. Can you please explain the entire situation? What went wrong?

No excuse didn’t make it, got in my own head and just gave up I hate to say that but that’s what I did. I got too hot in the steam room and REFUSED to go back in!!

You will be facing Leah Letson. She is coming of a sensational KO over Elizabeth Philips back in January 2017 at 145. What are your thoughts on her?

My thoughts on Letson are that she game to fight and I always appreciate that. As a fighter she has yet to face anyone like me so, I’m probably going to send her back to her gym with some new things to work on. I like her fight style so nothing but respect.

I don’t plan to stick to any weight class I want to be a 3x active champion in the UFC. Yes I am and will always be the DCS lightweight champ till I retire.

You recently called out Cindy Dandois from RIZIN. What do you think of her as an opponent? Will you face her at lightweight or featherweight?

I think she is great fighter and is game as well I only want to fight the best and she is top 5 so, that’s why I wanted her. Rina would have been the one called out but Cindy beat her so it was her I called out!! Whichever she like I can do, it does not matter to me!! I’ll be ready to fight her at any weight

You have been keen on competing against Cyborg. What are your thoughts on her performance against Holm? Where do you think you stand in the list of featherweight contenders?

I thought the fight was amazing, she just had the edge cuz her punches were harder. Holm did exactly what she needed to, Cyborg was just more powerful. I think some take downs would have helped Holm to bring the belt home if she had. But it’s cool because I wanted to be the first to dethrone her anyway, so I was hoping Holm didn’t fuck her up too bad!! I am a top 10 competitor in the featherweight division.

MMA is notoriously known for being a negative sport. Time and again athletes have quit the sport because of the draining negativity the sport has around it. Despite this you have always managed to stay positive. How? What is your message for people who find it difficult to deal with all of this?

I stay positive because I’m posing to, like HATERs pose to hate. It’s the balance that keeps me humble, without disbelievers you won’t have anything to accomplish if everyone thinks and know you can do something. It’s the yin to the yang, all is necessary in this place we call Life. I am and will always find joy in life and my mom taught me long ago, don’t let anyone take it, nor have control over you by shifting your emotions. Kill them with kindness she would say, I’m still working on that though!!! My message is invite the hate, it will make you stronger. As long as you don’t believe it isn’t true. Now some truth can hurt and we have to learn and deal with that as well. People try and bash me all the time about missing weight, and it’s true but I never care cause they don’t fight, they aren’t making weight or trying to begin with!! I just take the truth mixed with nonsense and make it my goal to shut them up for a sec. But trust I never want them to stop talking about me, then I may become irrelevant, and that definitely won’t happen!! Tell them keep talking hunny.

Who are your top 5 opponents? What made them the best you have faced?

1. Kate Bloomfield was my toughest she was my pro debut, she almost choked me unconscious, the scariest feeling I ever felt in a fight, I’m about to lose.
2. Bobbi Jo, she was ready, strategic, prepared and plain out worked me, but I can’t wait for us to dance again!
3. Killastina. Hit me, I’m sure as hard as I did, I only seen stars twice in my life, one by a male I fought in the streets and next by Killastina. We banged all rounds she’s was a great opponent.
4. Erin Smith my 2nd amateur she was game in my face blow for blow and had me working when I didn’t want to. I was tired, she pushed the pace on me, loved that fight.

To my fans keep up with your “the #1 Head Busta” baby I do this to please and get you all rallied up!! Thanks for all the support and love, it is needed and well appreciated!! God bless all.