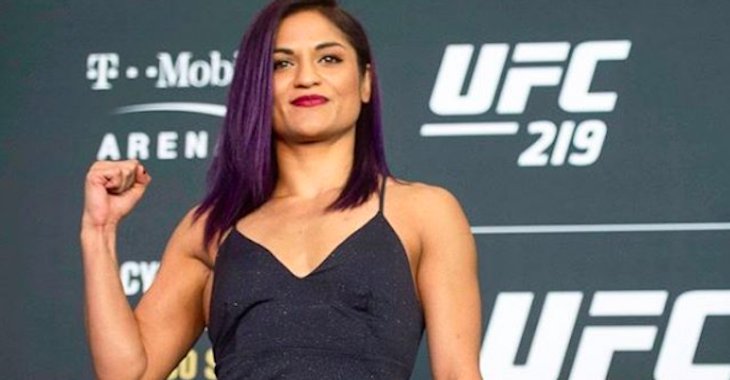 Strawweight Cynthia Calvillo lost to Carla Esparza last month and things were still looking promising despite the L…until..She was notified of a potential UFC anti-doping policy violation for Carboxy-Tetrahydrocannabinol also known as THC. Here’s the UFC’s statement on the matter.

The UFC organization was notified today that the U.S. Anti-Doping Agency (USADA) informed Cynthia Calvillo of a potential Anti-Doping Policy violation involving Carboxy-Tetrahydrocannabinol (“Carboxy-THC”) which is a metabolite of marijuana and/or hashish, above the decision limit of 180 ng/mL, stemming from an in-competition sample collected in conjunction with her recent bout in Las Vegas, Nevada on December 30, 2017, UFC 219: Cyborg vs. Holm.

USADA, the independent administrator of the UFC Anti-Doping Policy, will handle the results management and appropriate adjudication of this case involving Calvillo, as it relates to the UFC Anti-Doping Policy and future UFC participation. Because the Nevada Athletic Commission was the regulatory body overseeing the fight in Las Vegas and has licensing jurisdiction over Calvillo, USADA will work to ensure that the Nevada Athletic Commission has the necessary information to determine its proper judgment of Calvillo’s potential anti-doping violation. Additional information will be provided at the appropriate time as the process moves forward.

While marijuana isn’t considered a performance enhancing drug it is still against UFC policy to smoke it. Diaz…where you at?