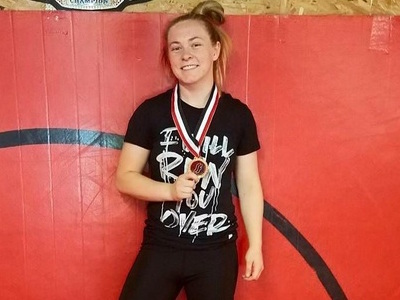 Kay Hansen made her Invicta FC debut last Friday at Invicta FC 26. She went on to defeat the hyped Emilee Prince via a first round submission. The 18-year-old strawweight thus established herself as a prospect to look out for. She took some time off to answer questions about personal life, inspiration and journey so far.

Yes, my family supported me. I have been blessed with amazing people who support me. My dad is my biggest supporter. Without him I wouldn’t be who I am today.

I think women’s MMA is evolving very quickly. In such a short amount of time women are becoming more well-rounded and aren’t as one-sided anymore. I think people respect women fighters and women definitely have earned a spot in mainstream media.

Who do you think are the top 5 greatest women MMA fighters of all time, women who have not only given exemplary performance in their fights but have also helped in the growth of the sport and have made it possible for women to have their place in some of the biggest MMA promotions?

Cris Cyborg is obviously one of the most important women. I get the privilege of training alongside her and she is unbelievable. She works so hard and is really a huge inspiration. Ronda is another obvious one. She did things that no one has seen before. She opened the worlds eyes to how badass women can be. Joanna is a great trailblazer as well, especially for the lower weight class. Kaitlyn Young, who is also a matchmaker for Invicta FC is also an amazing woman pioneer of the sport. She is a total badass and is personally one of my role models.

MMA is notoriously known for being a negative sport. Time and again athletes have quit the sport because of the draining negativity the sport has around it. Despite this you have always managed to stay positive. How? What is your message for people who find it difficult to deal with all of this?

I think it’s all up to how an individual handles situations. I personally don’t care what others think about me. I think it’s all what you make it and who you surround yourself with. I’m always surrounded by the best and if I’m not, then I take it upon myself to fix it.

You entered the match as an underdog at Invicta FC 26. Did it affect you?

I didn’t know about any odds of anything. Even if I did, it would not have affected my performance.

One of the most discussed topic in MMA today is fighter pay. What are your thoughts on the pay made by an average MMA fighter?

I think fighters need to get paid enough to live comfortably. Being a fighter and having a side job kind of sucks, but you have to make money. I think the amount of money you make should be earned. Obviously, the better you are the more you should make.

There’s nothing like fighting. No feeling in the world compares to stepping in that cage. I would suggest fighting only if you’re willing to work hard, fall on your face a little, and be willing to make sacrifices. It’s all worth it.