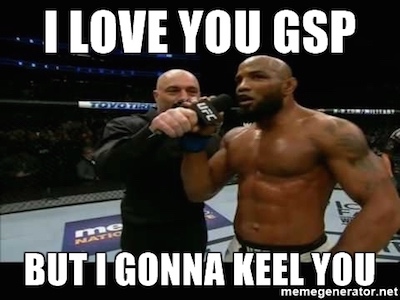 Yoel Romero recently spoke with BJPENN.com’s Chris Taylor on a number of topics. One of the biggest was about the future of the middleweight title holder GSP and the rumors flying that he might be done for good this time and vacate the title. This would shake up the division, but that didn’t seem to bother Romero that much.

If GSP decides to retire or go down in weight. Then the title for my division is free. Then maybe Robert Whittaker, who is number 1 the interim champion, will need to fight somebody. Maybe that somebody is me or maybe it is Luke Rockhold. I think that is what the UFC wants.

Romero lost to interim title holder Robert Whittaker at UFC 213 and he believes, as do others that a rematch with him is the right call. Robert has made it clear he is holding out for the big money GSP unification fight and realistically that might take a while if ever to sign making Yoel’s future opponent an “if” at best.

Right now I only think about the belt. That is the only thing I think about. There is no other option in my head. I want to rematch Robert Whittaker for the UFC championship after GSP vacates the title.

No matter how the title picture ends up he is still looking forward to competing sooner than later.

I don’t know when I’ll fight again. I would love to fight again early next year.

What do you think PMN pros? Should he wait or jump back in to the division fists flying?