What does the opportunity to fight for the Unified Championship mean to you and your career, right now?

I’m super pumped. I’m grateful for the opportunity and happy to be picked as one of the opponents for this bout. To be, honestly, everything is on the line for this. I’m looking at this as do or die – I’ve lost two in a row and the UFC doesn’t like records with too many losses, so I need to put together a win streak, here. That’s going to start with Michael Hay.

Are you starting to feel the pressure or is this business as usual?

No, it’s business as usual. I only really feel pressure when I fight at home. There is pressure to win the fight, because it’s important for my career – but they’re all fights you have to win. This one is a must win. If I don’t win this fight, then my chances at the UFC are next to none. I’m going to give it what I’ve got and see what happens.

How does Michael’s jujitsu rank against other guys you’ve fought?

Mike has good jujitsu. He tapped out Gower but I think Gower was being a bit aggressive – I didn’t really see the video, but that’s what I’ve been told. To be honest, everyone else has tapped out are good guys, but my jujitsu is better than all of theirs. Anybody who knows anything about Champions Creed knows that we have legit jujitsu. If he’s planning on jumping guard on me, he’s going to be eating some elbows. It’s going to be a different story. Jujitsu is a lot different when the guy on top is able to hit you and that’s what I’ve really been working on this fight camp. We’ll see what happens.

What should the fans expect from this fight

They should expect an exciting fight and a finish. I want to go in there and take it to him. I know he hasn’t been beyond the first round. I’m not saying that he can’t make it out of the first round, but I want to take him into the later rounds and see how he’s able to deal with it and finish him off when I see the opportunity. Like I said, I’m going in there and I don’t want to win a fight that’s boring – I need to win this for my career and I need to win it with style. Like I said, it’s do or die – if I go in there, give it all I got and fall short, then it is what it is. This is potentially the last fight of my career if I want to go anywhere. That’s how I’m looking at it.

Sometimes we see two guys with great jujitsu facing off and it becomes a striking match. Do you see that happening at all?

That’s how I’m hoping it plays out. That’s how I think it could play out. That’s really how we think it will happen. I’ve really been working on my striking game and taking lessons with Hakeem Dawoda, he just got signed to the UFC. We’re sharpening my basics and it’s bringing my fight game up a notch. If it goes there, then the fight should be mine. That’s how I see it playing out.

What should fans expect out of you in this fight?

They can expect me to go in there and be my old self. I’m going in there with some crazy, unorthodox striking. We’ll see what happens – if he takes me down, don’t count me out, I’ll get back up and take it to him. 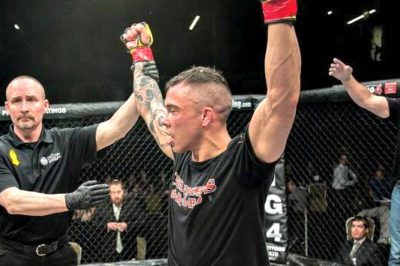