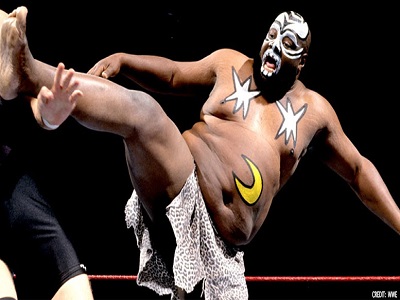 Kamala is an imposing figure in pro wrestling history. He was presented as “The Ugandan Giant” and often walked to the ring with a tribal mask, spear, and shield. He terrified us as children and in later years unfortunately faded from the minds of most  Rock and ‘Restling era wrestlers do. His health has deteriorated and now it appears we may lose the legend. Here’s what WWE released about the giant and his current health.

WWE.com has learned that WWE Legend Kamala (James Harris) is currently on life support after undergoing emergency surgery this past weekend.

Juanita James is his step daughter and she provided us with an update on Facebook.

Please [pray] for my stepfather aka “Kamala” James Harris. [He] had emergency surgery this morning around 3 a.m. They didn’t think he would make it out of surgery, but God. He’s on life support. His buddy Koko B. Ware is here.