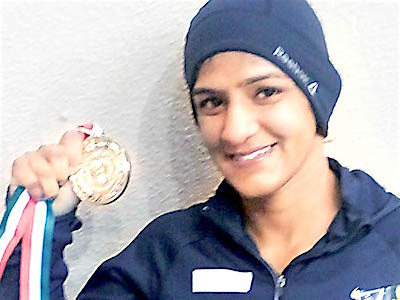 2016 proved to be an amazing year for Indian women wrestling. Sakshi Malik became the first Indian women to win an Olympic medal at wrestling, India managed to send a record number of three wrestlers to Olympics and the amazing success of the movie Dangal which managed to inspire countless girls to take up wrestling. 2017 on the other hand wasn’t that good; in fact it was outright bad.

The year started on a good note with Pro Wrestling League in January. Olympic wrestlers like Mariya Stadnik, Erica Wiebe and Elitsa Yankova competed in the league. This gave Indian women a very good insight into the training camps of elite wrestlers and also allowed them to develop their games in many dimensions. Despite the good start, Indian women failed to draw significant quality performance when put against elite competition.

The first major halt for Indian women was at the Senior Asian Wrestling Championship. On paper the performance given by them was amazing. The campaign included four silver and two bronze medals. However, there was no elite competition in the tournament. This was a non-Olympic year so the majority of the participating nations sent younger and under experienced wrestlers to the tournament. Despite that Indian women failed to bag up a gold medal in the tournament. The women’s team was clearly exposed in the World Wrestling Championship where not a single fighter made it to the quarterfinals. In fact, despite having a relatively easy draw, medal hot prospect Sakshi Malik was eliminated in the very first round. Medal prospect Vinesh Phogat to went down in the second round, where she lost by fall to American, Anthony. The year didn’t provide the result we all expected; however there were some really great performances. Let’s take a look at the performances of the senior women in every weight class and who performed the best in each one of them.

48 kg clearly was the most active division in women’s wrestling. The division which was ruled by Vinesh Phogat before 2016 Rio Olympics was an open field in 2017 due to her career threatening injury at the event. The first major event for the Indian women was the Dan Kolov-Nikola Petrov open in Bulgaria. The charge at 48kg was led by Vinesh’s cousin and former three-time junior world medalist, Ritu Phogat. Ritu carried high hopes behind because of her sister’s success at various international cups. Ritu managed to deliver an amazing performance at the tournament where she ended up with a Bronze medal, losing to hometown girl Migelena in the semifinal. She won the repechage rounds enroot to win the bronze medal. She continued to lead team India at 48kg in the Asian Wrestling Championship, the first major international test for Indian women. Phogat did an amazing job till semifinal before running into the Japanese titan Yui Susaki. Susaki turned out to become 2017 senior as well as junior world champion, the scariest part about her is that she’s just 18. Susaki tore through Phogat defeating her 9-0. The thrashing defeat however did not end her campaign. She was then slated to meet Olympic Bronze medalist, Sun Yanan for the Bronze medal match. However, Yanan gave Ritu walkovers win. It was rumored that the Yanan got hurt and wasn’t fit to compete.

It was now time for world team trials. Vinesh Phogat, division’s former star decided it was good for her to move down weight classes and compete in her home weight for the world championship. Hence, Ritu Phogat moved up to 53kg a move which was disastrous for her since she couldn’t even qualify for the world team. Vinesh too didn’t really have a great as a 48Kg’er at the worlds. First luck didn’t favor her as she ended up with an ultra-tough draw; she had super-hot prospect Susaki, two-time junior world champ Victoria Anthony and junior world medalist Oksana Livach in her path to medal rounds. Despite that, Vinesh didn’t give up. She managed to deliver an explosive opening round where she thrashed Livach 13-2 to set up a meeting against USA’s Anthony. After a dominating first half, Vinesh was taken down and pinned by the more experienced Anthony. Anthony was eliminated in the next round by Susaki, which resulted in the end of Vinesh’s campaign.

Asian Indoor games were an important event for India. For the first time in 13 games, indoor games had the event of wrestling in it. However, Vinesh pulled out at the last minute from the tournament, which resulted in her being banned from national trials for the commonwealth championship. She was replaced by Sheetal Tomar. Tomar defeated Sandhu from Australia in the opening round before losing to eventual Gold medalist and former Rio Olympics Bronze medalist Sun Yanan.

She got the opportunity to play for Bronze medal. She won both her matches via fall getting India a bronze medal.

The 48kg underperformed at most events. A large part of it was because of the draws our wrestlers got but that can never be an excuse. In fact, Ritu did an amazing job at Asian games against superior competition. She didn’t have the easiest draw but still she managed to win a medal. Moving up a weight class didn’t turn out to be good for her as she failed to qualify for the team. Vinesh too managed to deliver a quality performance but didn’t really look as good at 48 kg as she looked at 55kg at the Asian wrestling championship. Cutting down to 48kg made it look as if she had taxed her body, her pulling out of Asian indoor games clearly prove her body was physically exhausted after worlds. A better move on her end would have been continuing at 55 kg to the world championship. That move would have given her a better knowledge about her body and weather can she compete in a higher weight class or not. This experience would have prepared her for 2018 and would have given her a clear vision at which weight class could she best at for Asian and commonwealth games.

Ritu Phogat was hands down the best performer in the 48kg category. She leading the charge at Asian and Bulgarian championship resulted in great performances. In fact had she stuck around at 48kg and Vinesh had moved up to 55 kg, the result at the worlds could have been a bit different for 48kg category. Ritu wouldn’t be a serious medal prospect, given the draw India got at the worlds, but she could have gotten into a medal match round. Ritu in 2016 also managed to bag a gold medal at the commonwealth wrestling championship and also happens to be the most successful junior women wrestler in India’s history with total 3 medals to her name.

However, Ritu’s first big test as a senior will come in November at the U23 world championship in Poland. This is for the first time Ritu will compete against elite leagued senior teams from across the globe. This will explain a lot about her game and whether or not she is ready to be a medal prospect at 48kg for upcoming Asian and Commonwealth games.