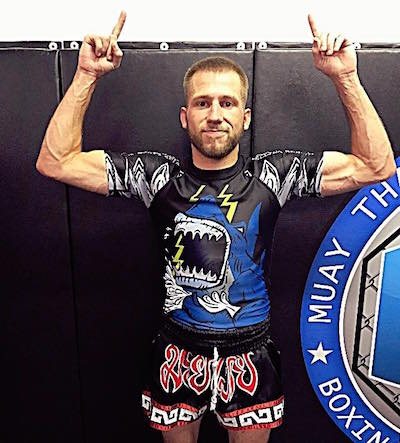 Jacob Kilburn will headline Valor Fights 46 at the The Fairgrounds in Nashville on Nov. 4 when he takes on fellow Clarksvillian Edward Massey. The winner will move on to compete for the Valor Fights featherweight title. Pro MMA Now caught up with the man of faith and fighting to get his thoughts on the matchup, find out what it was like to recently get some training in with one of the UFC’s top stars and much more.

Thanks for talking with us Jacob. You’re getting ready to take on Edward Massey in a number one featherweight contender fight in the Valor Fights 46 main event. What’s your take on Massey and how do you see yourself matching up with him?

I’m excited man! It’s gonna be fun! My opinion of Edward is that he seems like a guy with some good skills, very tall for the weight class, but I just don’t think he is ready for what I bring to the table.

That’s a big deal to headline the card which will stream live on FloCombat. What would this victory mean to you?

I headline everywhere I go usually, just because of my entertaining fight style. As far as the victory….it means I get paid a lot of money.

Being that you and Massey are both from Clarksville, have you ever trained together or crossed paths in the past?

Yeah it’s weird having to drive to Nashville to fight a guy from my hometown….we have plenty of parking lots here in Clarksville, but cool we’ll go get paid. As far as cross paths, we have never trained in the same room, but we’ve trained at the same spots. I know he came and sparred at Suco Boxing in Hendersonville, TN and that’s my spot. So coach has been telling me all about him.

I saw you got in some training with Stephen “Wonderboy” Thompson awhile back. How did that come about, what was it like, and what were you able to pick up from the UFC star?

Wonderboy and his Dad Mr. Ray were the coolest. We worked some foot movement drills and some entries. We exchanged info, and I’m gonna make a trip to see him and train again soon I’m sure.

You went up for a 150-pound catchweight bout last month and took your first professional loss. We know that setbacks are there to help us improve. What did you learn from that experience that has helped you moving forward?

I learned there is a reason we have weight classes, but more importantly I’m not taking just any old fight anymore. I’m only signing against a guy who wants to engage and try to finish. I want a fight and my traveling fans want a fight.

What inspired you to want to become a fighter?

I saw a Rocky movie when I was a kid, then a Steven Seagal movie a little later, and Ken Shamrock’s VHS tape when I was like 11, I knew instantly I had to be in the UFC!

What do you think you’d be doing if you weren’t fighting?

I don’t think like that. I don’t “what if” because it’s negative. God has me on this path and I’m here indefinitely.

From your social media pages, it seems you have a new young lady in your life. How’s that going and is she a fight fan?

Alyna is amazing. She’s a woman who loves God and supports my training 110%! She is vegetarian like myself, so she keeps me on track with the diet. All in all she’s an answered prayer.

I appreciate your time Jacob. Any shout outs or final words for the fans?

I first have to thank the God of Abraham, Isaac, and Jacob for giving me strength to do what I do! I also need thank my sponsor Rolling Bones Gear who is taking care of me from Japan, everyone check them out on Facebook! Lastly, my awesome family, friends, and fans who follow me everywhere to watch me fight!