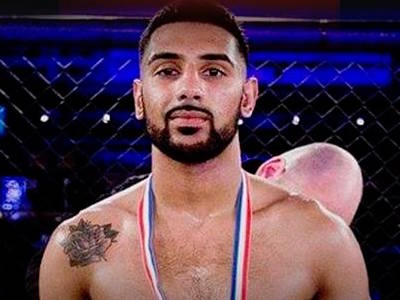 Hardeep “Havoc” Rai is one of the most promising lightweight prospects in mixed martial arts. After an amazing run as an amateur the 21-year-old finally turned pro at Brave 5, where he arm-barred fellow prospect Arnan Chaiyasan in the very first round. Rai will be returning to the MMA cage at Brave 9 on Nov. 17 to face Alex Trinidad. Ahead of his next fight, Rai took some time to answer a few questions regarding his background, his upcoming opponent, shifting training camps and more.

See most people assume that my parents put me in combat sports from a young age but that wasn’t the case. We always loved fighting, we grew up watching every fighting/combat sports movie and trying out the moves trying to replicate what we saw. But I didn’t really do any other sport besides football (soccer). I was introduced to MMA when I was 13 and was instantly hooked, after a few years I thought that I’d like to try it, so at the age of 15 I started training, with the intentions of becoming a professional fighter and here I am 5 years later. Initially when I started training I wanted to just do MMA but after training for about a month fell in love with Brazilian Jiu Jitsu which I focused solely on for the next year and a half winning English, Welsh and British championships in the first 8 months. When I got my blue belt I started to focus on putting everything together and started training MMA and then had my first amateur fight at the age of 18 which I won in 14 seconds via TKO, that really was the catalyst that kick started my career. I love the sport for many reasons, but most of all I love how it challenges not only my body but my mind also. I push myself everyday mentally and physically and it has just made me a better and stronger person. This is something I will never give up even long after my career is over.

Who was your influence? Who is your favorite fighter? Why?

Right now my two biggest role models are Michael Bisping and Arjan Singh Bullar. Both are inspirational figures to me, Michael Bisping being the first UFC champion from England. That’s incredible motivation for me because I know it’s possible, also he’s had such a long road to get where he is at now and its a lesson to never to give up and to always chase your dreams. Arjan Bhullar for obvious reasons, he’s the first Sikh and first person of Indian descent to be in the UFC which is a massive achievement and should be praised. He’s leading the way and laying the path for the next generation of fighters (like myself). But when I first started watching UFC when I was younger I used to love Wanderlei Silva, I just love how he’d always bring it and put on exciting fights. Something that has stuck with me and I aim to put on equally as exciting performances every time I step in the cage.

When you look behind and realize that this is how far you have made, that too at such a young age, how does it feel? What according to you is your greatest achievement?

It feels good of course, but I know I have so much further left to go in this journey. My biggest achievement to date was representing my country in the World Championships and placing 3rd. Although I didn’t get the Gold as I aimed for I was still content with be my the 3rd best amateur in the world at a weight above which I fight at. I lost a split decision to the eventual winner who is the best amateur pound for pound. Putting it in perspective I did very well with what I had.

MMA is a relatively niche sport. Did people around you support your decision of taking this sport as a career? What are the biggest challenges that you have faced?

Everyone has been nothing but supportive from day one. Not only does that include my parents but they have probably been the biggest support over the years. Not just in taking me to competitions and being there for my fights but the little things like making sure I eat correctly, have travel to training, have training clothes/equipment. I wouldn’t be where I am without them and I’m so grateful for everything they have done and continue to do.

You made your professional debut on Brave 5 in India. What are your thoughts on your performance? Did the fight go the way you planned it?

The fight went exactly as planned. I was always planning to take him to the ground as he was a striker. In the weigh ins I could see he was anxious and his right hand was twitching which to me was a sign. Sure enough the first thing he threw in the fight was the right hand, and he loaded so much into it I was able to time it and duck under the punch and take him down. Finishing him in 2 minutes, however I feel as if I could have done it quicker. Nevertheless I was pleased with my performance and came out of the fight healthy.

You’re one of the few MMA fighters from Indian descendants who have fought in India. How was the experience?

The experience was amazing, when I came out to make the walk to the cage the massive roar from the crowd was nothing like I had ever experienced. I didn’t let it overwhelm me, instead I used that energy positively to give me strength and focus.

You have started training at Jackson-Wink MMA. How does it feel to train with the best fighters on the planet? What do you expect out of yourself from this training? Do you plan to change your base camp to Jackson-Wink?

Yes I’ve made the move over and am now fighting out of Jackson-Wink MMA. It’s such a humbling experience to share the mat with the best fighters in the world day in and day out. My game has reached new levels since being out there, training with the best in the world and working closely with coaches like Joey Villasenor, a veteran in the sport, is only making me even better. He works to my strengths and harnesses my creative and unorthodox nature putting it into specific drills and techniques which you will get the pleasure of seeing very soon. As soon as you walk in to the gym there’s a quote painted in the wall “Through these doors walk the greatest fighters in the world.” It gives me chills every time I see it because now I’m a part of this amazing team and it gives me that little extra push to achieve my dreams on days you are feeling tired and drained. Anything is possible if you put your mind to it, being surrounded by the biggest names in the sport only helps strengthen that belief.

You will be facing Alex Trinidad in your next fight? What are your thoughts on him as an opponent?

I think he’s an average fighter, nothing special and nothing that poses a threat to me. I’m better than him everywhere and on November 17th I will show that. Of course I see myself winning the fight, there will be no other outcome.

Well it’s just something that came about naturally you know, I was with some friends and we were talking then someone said something about causing havoc. My friend looked at me and said that should be your fighting nickname and it stuck since then.

Fighters have time and again commented that they have faced some form of racial discrimination. A notion which has come out is that some MMA promotions don’t treat fighters of color the same way they treat white fighters. What are your thoughts on this? Have you ever faced such problems?

I’ve personally never faced any such discrimination. I just fight whoever they put in front of me and do everything in my power to beat them. I know for sure that in Brave there is no racial discrimination at all, they have fighters from all over the world from different backgrounds, different ethnicities, different races and all have gotten an equal opportunity. In fact I feel as if Brave is the most racially diverse and equal fight promotion in the world. All you have to do is look at the roster and even the champions/title challengers to see that for yourself.

Well if you’re and average fighter you will get average pay, I’m not an average fighter so I can’t speak for them. But yes I feel like most fighters don’t get as much as they deserve but I think that’s changing. One thing I do have an issue with is the fact that you get a set amount to fight which you’re guaranteed and usually double if you win. I feel like there’s no need to have that incentive to win as personally I always want to win and I always fight to win. I feel like because of that fighters are so worried about losing because that means half the payday which isn’t even the greatest pay in the first place and as a result you have people fighting not to lose rather than fighting to win making boring fights.

Not just MMA but anything you want to do in life just go and chase it. Have a vision, believe in the vision and every day work towards and get one step closer to making that vision a reality.