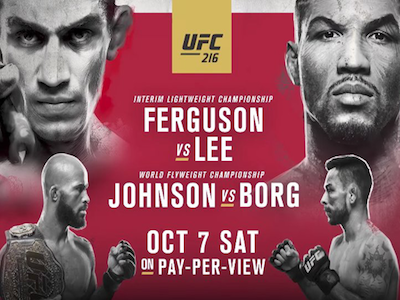 UFC 216 takes place this Saturday, Oct. 7 from T-Mobile Arena in Las Vegas. In the headliner Tony Ferguson and Kevin Lee will battle for the interim lightweight championship. And in the co-headliner flyweight champ Demetrious Johnson looks to set the record with 11 consecutive title defenses as he takes on top contender Ray Borg.

Borg comes in as the biggest underdog on the card at +900, while Johnson is a massive favorite at -1375. That’s a huge discrepancy, more massive even than the odds in Conor McGregor’s boxing debut against the G.O.A.T. Floyd Mayweather Jr. Considering no one has even really come close to upstaging “Mighty Mouse”, and Borg is only on a two-fight winning streak and has an overall record of 7-2 inside the octagon, the discrepancy in the odds seems mostly justifiable — though somewhat inflated in my opinion.

Borg certainly has the capacity to injure and upset Johnson. Six of his 12 career wins have been by submission and two by knockout. He most recently has unanimous decision wins over Jussier Formiga and Louis Smolka. His other UFC wins include a unanimous decision over Geane Herrera and a pair of submissions over Chris Kelades and Shane Howell.

By comparison, Johnson’s resume makes Borg look like an amateur. The champ has bested the likes of Henry Cejudo, John Dodson, Joseph Benavidez, Ian McCall, John Moraga and a whole host of others. Ten of his 26 wins have been by submission and five by knockout.

Johnson will likely retain his title and etch his name into the UFC history books, however, with a $100 bet on Borg paying out $900, one could find a worse underdog to put their money on. If of course, you have the money to throw away, because there’s only a slight chance he pulls it off. The best thing Borg has going for him is his age, 24. Johnson is 31 and has been competing professionally for much longer. Borg may likely be champion one day, but it’s probably just a little too soon while King “Mighty Mouse” is still on the throne.

Here are the full betting odds for UFC 216 (courtesy 5dimes):