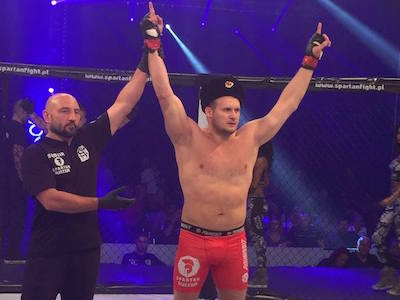 Russian light heavyweight knockout artist Vitaly Shemetov (28-9, 1 NC) is currently riding a 10-fight winning streak, including eight by stoppage. Pro MMA Now has a long history with “The Dancing Bear”, starting way back in our Oct. 2008 profile on the Shemetov brothers. Now, here we are nearly a decade later and Vitaly is better than ever and stopping opponents one after the other. It was high time to catch up with Vitaly and find out how things are going.

Pro MMA Now: You had a first-round knockout against veteran Shannon Ritch back in April, what are your thoughts on that fight and how it played out?

Vitaly Shemetov: It was a tricky bout, because Mr. Ritch is extremely experienced fighter, he played a game, he tried to provocate me to hit him, when he was on his knee, that would result in my disqualification. No doubt he is stronger than me in grappling and wrestling, because he is black belt in BJJ and it means no jokes on the ground. I knew that, he knew that, and he always invited me so to join him on the ground, people said that it looked like when Fedor fought Jeff Monson, because Monson also always invited Fedor to go down.

Pro MMA Now: What are your thoughts about your last fight in August against Rakim Cleveland and how it ended?

Vitaly Shemetov: I felt myself rather confident during this fight, then I got a low blow from Rakim, truly to say I had no desire to continue, but I didn’t want to disappoint Chinese audience and decided to go on. Then accidentally we clashed heads resulting in a huge cut on Rakim’s face. Promoter is currently thinking about revenge, who knows, maybe we will meet again with Rakim in China.

Pro MMA Now: How is your brother Sergey doing and will he be stepping back in the cage for a fight any time soon?

Vitaly Shemetov: Yes, we are negotiating with European promotion, probably in December you will see him in the cage.

Pro MMA Now: How did you get the nickname “The Dancing Russian”?

Vitaly Shemetov: Good question, I got it from American audience at X-1 event in Hawaii, US when I knocked out Pride veteran Shungo Oyama and the guy responsible for lights and music turned on very exciting song and I couldn’t hold and started to dance 😊. But I still respect Shungo Oyama, he is a real fighter who fought during his career against such MMA and K-1 superstars as Mirko “Cro Cop” Filipovic, Melvin Manhoef, Renzo Gracie, Peter Aerts, Dan Henderson, Wanderlei Silva, etc.

Pro MMA Now: What are your goals in the sport of MMA now?

Vitaly Shemetov: Sure to be at the top of MMA world 😊. But talking about small targets, right now we are negotiating with Sherdog about registering our fights before 2004, because currently I have about 14 fights missing in Sherdog database, you know in Russia a lot of fights were in shadow and promoters didn’t bother to send results to international databases. We provided Sherdog videos, poster, but still no results unfortunately. The UG and Tapolgy have currently more exact information about my record.

Pro MMA Now: What is your favorite thing to do when not fighting or training?

Vitaly Shemetov: I very like Russian style sauna, you know when it’s -40 degrees Celcius and you almost naked dropping your body into the ice cold water and after that rubbing with snow. After this you have a feeling of freedom and you can hear your soul and spirit more clear. Really everybody should try it… For sure I will do that again because as said in TV “winter is coming” 😊.

Pro MMA Now: What does the future hold for the Shemetov brothers?

Vitaly Shemetov: Sure as plenty of fighters all over the world we want to be a part of powerful promotion such as UFC, Bellator, ONE FC. We can be interesting for audience and move PPV up. We created an interesting entrance, here is a video…

Pro MMA Now: What would you like our readers and the MMA world to know about the Shemetov brothers?

Vitaly Shemetov: Just one simple phrase 😊 “Red Bear has awoken. The World will see his MIGHT… and dance 😊”!