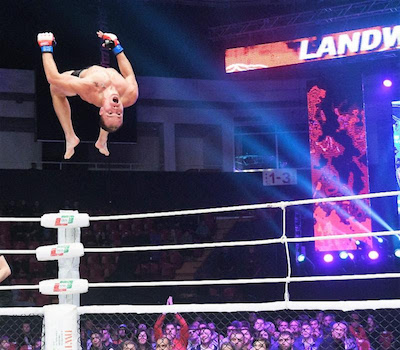 CLARKSVILLE, Tenn. — One of the United States’ best 145-pound pro MMA prospects Nate “The Train” Landwehr (9-2) made the trip to Kazan, Russia over the weekend to debut for the world renowned promotion M-1 Global. Landwehr faced Combat Sambo master Mikhail Korobkov (13-3-1) on the M-1 Challenge 83 main card that was streamed live around the world.

M-1 is known as a breeding ground for Russia’s future MMA superstars and the deck is not generally stacked in favor of the foreigners brought in to help build their budding talent. But in the fight game every fighter has the chance to take their destiny into their own hands and leave it off the judges’ scorecards, and that is exactly what Landwehr was able to do.

Landwehr was able to stop Korobkov via knockout at 1:31 of round 2, but his victory was not without adversity. Korobkov was able to land some hard shots and the 27-year-old Russian grappling wiz was able to take Landwehr down a number of times and threaten with submissions, but Landwehr showed a good chin and was able to continuously fend off the attack and get back to where he had the clear advantage on the feet. “The Train” also had Korobkov in a tight triangle at the end of round 1.

In round 2 the two began to trade strikes in the pocket and Korobkov was able to get another takedown. Landwehr worked his way back up only to eat a couple hard punches. The 29-year-old Clarksville native hung tough though and kept coming forward. After stunning Korobkov in the clinch, the Russian tried to get some distance but Landwehr dropped him with a left and followed up with vicious ground and pound that put him out cold.

It was a well-matched and competitive bout that not only showed why they call Landwehr “The Train”, but once again proved he’s one of the most entertaining featherweights in the world. He’s got the charisma, he’s got the mouthpiece and he has the talent. Landwehr is a superstar in the making who just needs the right marketing machine behind him.