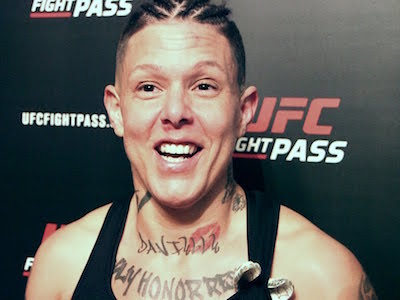 Knockout artist Christine Ferea recently made her second appearance in the MMA cage against fellow decorated kickboxer Tiffany Van Soest. Despite giving a strong performance, the Muay-Thai standout couldn’t get the nod from judges and lost the fight via unanimous decision. Ferea made an impactful pro MMA debut back at Invicta FC 21 in January by knocking out Rachael Ostovich in the third round by a series of punches. Ferea, ahead of her next move, took some time off to answer questions about her personal life, career and more.

When you look behind and realize that this is how far you have made, how does it feel? What according to you is your greatest achievement?

Sometimes I forget to be proud of how far I have made it. I am always reaching for bigger goals after I conquer one. I always want to elevate myself to a higher level as much as I can, I’m always pushing harder and harder. When I very first started as an amateur I didn’t know where I would go with this, but just kept at it year after year. Now I’m fighting for a great organization and I feel happy about that. My greatest achievement is changing my lifestyle from what it was in my early 20s. I focus more on trying to be a better person daily and that has been my greatest achievement.

In most of your fights you are the underdog. What is your take on this?

Honestly being the underdog or the person that is supposed to lose or suck does not affect me at all. Hard work and dedication will separate me from the privileged. I have never been a favorite of anybody’s and I want the people that are underdogs to see and witness with everyone’s negative opinion of our outcome that it does not matter as long as we put in the work.

In your last fight you faced decorated kickboxing world champion Tiffany Van Soest. What are your thoughts on the match? You lost your perfect record in your last fight. Did that affect you at all?

There were a lot of variables that happened in that fight prior to the fight that determined the way I fought. I learned valuable lessons in that fight and that fight camp. One being that is 115 pounds is not my weight division and I will never fight again at that weight. She was a very tough competitor and was the better woman that night. So that is that.  I don’t care about a perfect record I’ve had a perfect record before it doesn’t mean shit.

What are your next plans? Which type of opponent would you prefer?

My plans are to keep training hard and defeat my next opponent and who the opponent is never matters. I will be ready for wherever the fight goes, I’m a fighter and I fight whoever they ask me to.

An opinion which comes out again and again is that MMA isn’t meant for women. As someone who practices MMA and has many fans, what are your thoughts of people who refuse to accept that women too can fight?

My thoughts about people, who think that when we can’t fight is nothing, come to Hardknocks Muaythai and I’ll show you that we can.

Women’s MMA has gained a lot of attention in the past few years. What are your thoughts on the evolution of women’s MMA? Do you think that women MMA fighters have cemented their spot in the mainstream media?

I am very happy that women have broken through to the mainstream, all the women that have put in work to do their best to be on the large platform deserve to be there or any platform for that matter.

Amanda Nunes became the first openly lesbian fighter to hold a world title in MMA. What are your thoughts on this? You’re openly lesbian. Has this ever had an affect on your combat sport career?

I don’t know if me being openly gay has ever affected my career negatively, it has never been told to my face. Although I do see treatment favors those who are not and those who have a certain look.

Today in the USA there is a lot of talk going around LGBT rights. What is your take on the position of LGBTQ community in the USA today?

MMA is notoriously known for being a negative sport. Time and again athletes have quit the sport because of the draining negativity the sport has around it. How did you deal with the negativity? Did the backstage politics ever affect you?

There are negatives and positives to everything. I understand what we do is extreme, we get in the cage and fight trying to harm each other physically and before the fight mentally sometimes. I can see how it can be taken as a negative activity or sport. But for many of us that are that have come from rough places this place is way more positive than I could ever be negative. It teaches so much discipline, respect, and honor if you are with the right people. Although I have been around gyms that have been shit and they teach nothing but how to put people down mentally and physically. But like any other job in the world there are the negatives and positives, the good jobs to bad jobs, the good companies. For me I choose to use it as a positive change for myself. I can get grimy in this game if I wanted to but that is not who I want to be.

Any message for your fans.

To my fans I just want to thank you for believing in me throughout this entire process. This sport has saved my life and gave me a life. I have a beautiful wife and a positive future now. Without the fans there is no fight, there is no reason to fight, it is all you guys that keep this going. There is one thing missing is for me and that’s a strap around my waist that I will get within the next year and can’t wait to celebrate with you guys. I am very grateful for every one of you.