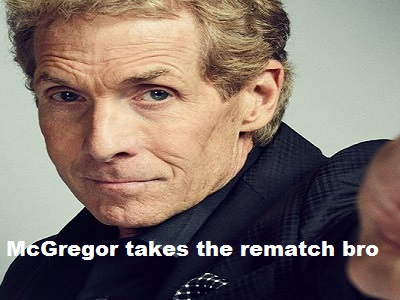 FOX Sports 1 personality Skip Bayless is back baby! On his “Undisputed” show he told co-host Shannon Sharpe something that kind of blew us away in reference to a potential return bout between Conor McGregor and Floyd Mayweather Jr. Let’s preface this by referencing his previous comments that the referee saved Mayweather in the ninth round. That’s important to know before you read this or you might think he’s a little off his rocker.

Would I buy a rematch? You better believe I would buy a rematch because Conor McGregor would win a rematch. And this man across from me knows it, which is why Floyd would be foolish to accept a rematch for any amount of money because Floyd did look old in this fight as I thought he would look old.

He’s forty-and-a-half years of age. I have never in my life, and I’ve watched just about every Floyd fight, seen him have to fight so desperately because he was in huge trouble. Have you sever seen swing from the heels so wildly and miss so often? Like, swing with roundhouse haymaker rights and just hit run. I’ve never seen it. He fought completely out of character, often of control, and certainly out of his comfort zone.

Wow. What do you think? Could Conor get it done now that he faced Mayweather once before? If Chael Sonnen is correct in his prediction we will see Nate Diaz 3 first.