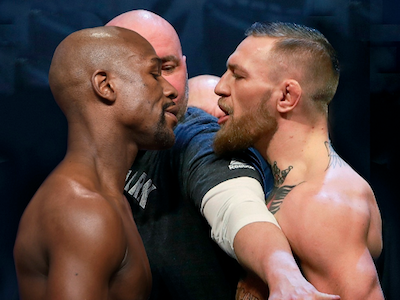 Fox Sports 1’s Skip Bayless said that Conor McGregor was on the verge of possibly stopping Floyd Mayweather Jr. in their bout Saturday. He says from his perspective that Referee Robert Byrd stepping in at that crucial moment and pausing the action saved Floyd and his undefeated record. Here’s what he said in the now viral Facebook video post.

The whole thing flipped and turned in round number nine. Floyd Mayweather was in trouble in this fight. But, the turning point to me, and I would like to see the video of this came in round nine,

It was ironically the round Shannon Sharpe predicted a knockout for Floyd and the round I predicted a knockout for Conor. Right away, Conor was coming off his best round, a bounce back round in round eight, in my card I had him ahead. Then in nine, he comes out aggressive and he stunned Floyd. He hit him with a hard left, rocked him and buckled him and Floyd’s in trouble in the corner and when Conor goes in for the “kill,” it happened so fast I need to see a replay, but he had him and Robert Byrd pulls him away.

In that moment, I thought that’s it. Again, I’m just going off my instinct, my gut and Conor had him on the ropes. He was then backed off to the middle of the ring and he had spent himself on that salvo. Eight took a lot out of McGregor. He took a shot to end it early in round nine and he got pulled off. I swear Robert Byrd saved the fight. He saved it. Byrd, longtime referee in Las Vegas, highly respected. but he gave Floyd a big break he didn’t deserve.

Floyd seemed to be complaining about something and did appear to be hurt. Some are speculating that it was a low blow. Your thoughts?